Anna Kournikova and Enrique Iglesias have shared the first photos of their newborn daughter.

The couple welcomed twins Lucy and Nicholas two years ago. And days after Enrique's brother Julio Iglesias Jr. recently confirmed they became parents for the third time, Kournikova and Iglesias took to Instagram to share the first photos of their baby girl.

In the caption, they revealed that the newborn was born on January 30.

"My Sunshine 01.30.2020," Iglesias captioned the photo of himself holding his newborn daughter.

Kournikova later shared a photo fo her own, which showed her holding her daughter, as Iglesias kissed her on the forehead.

The couple kept Anna's pregnancy under wraps, but recent photos obtained by Hola! Spain show them on a yacht in Miami, with Kournikova dressed down with a blue hoodie covering what appears to be a baby bump. 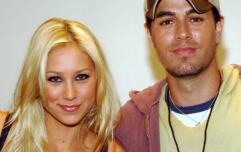 END_OF_DOCUMENT_TOKEN_TO_BE_REPLACED

Neither Kournikova or Iglesias publicly commented on her pregnancy before the Instagram posts on Thursday. However, the couple also kept pretty tight-lipped during the 38-year-old's first pregnancy - only confirming the twins' arrival days after they were born.

popular
DSPCA and Gardaí rescue over 30 puppies and dogs from Dublin apartment
Ireland to be swarmed with freezing weather in the minus figures next week
Stacey Solomon mortified after walking around shop in see through leggings
Rob Kearney and Jess Redden arrive at wedding venue ahead of big day today
8 gorgeous Irish Christmas markets you need to visit this winter
Tributes paid to 29-year-old Irish woman who tragically passed away on holidays
These are the most popular baby names for 2021
You may also like
3 years ago
He'll always be our hero! Enrique Iglesias has announced a Dublin gig
3 years ago
Enrique Iglesias shares photo with one of his newborn twins and it's adorable
3 years ago
Congrats! Huge news tonight for Anna Kournikova and Enrique Iglesias
5 years ago
What Ever Happened To Enrique Iglesias' Mole?
6 years ago
Enrique Iglesias Has Been Arrested In Florida
1 week ago
The Chase's Paul Sinha was relieved when diagnosed with Parkinson's
Next Page