The rapper sparked rumours that she has already wed her fiancé, Kenneth Petty, after she changed her name on social media to Mrs. Petty.

Nicki was speaking to Queen Radio this week saying that she has already obtained a marriage licence and had "about 80 days" to marry him.

She said: "[We] filed for the marriage license and we still had to pick it up and I was travelling, by the time I came back, we had to renew it again.

Who a hotta B? Who got alotta D? who poppin like a P when he be hoppin out da V? #KenAndBarbie 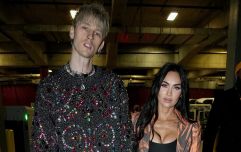 END_OF_DOCUMENT_TOKEN_TO_BE_REPLACED

She said that she doesn't want to have a big wedding until her next album comes out, however she will be married before it does.

She continued on to say: "I’m very happy about that because my baby makes me so happy."

Nicki and Kenneth reportedly first met when they were teenagers, but didn't begin a romantic relationship until last year.

popular
Love Island’s Afia explains why Gemma’s dad has not been mentioned on show
Two dumped islanders have confessed their feelings for each other since leaving the villa
Why Are Men so Obsessed With Boobs? The Answer is Pretty Surprising...
Here Are The Top 20 Most Common Pin Codes in The World
Selling Sunset's Maya Vander experiences miscarriage
Shaughna Phillips brands Love Island heart rate challenge "fixed" and "vile"
Outrage as woman says doctor told her to "be quiet" during labour
You may also like
7 months ago
Paris Hilton got hitched! The heiress is officially married
8 months ago
Gogglebox Ireland's Dale and Dawn are officially married
8 months ago
Lena Dunham has reportedly gotten married
2 years ago
Hilary Duff has married Matthew Koma in a 'small, low-key' ceremony
2 years ago
Fair City's George McMahon marries longtime girlfriend Rachel Smyth
2 years ago
Dwayne 'The Rock' Johnson has just married his longtime girlfriend Lauren Hashian
Next Page