He says that his comments we're picked up incorrectly.

Nicky Byrne has taken to Twitter to clear up comments he made - or didn't make - about Little Mix.

The Mirror recently published a piece claiming that Nicky said the girl band's performances were too "sexual" and questioned at what age children should be exposed to their concerts.

The quote from the star read: "If you go to a Rihanna ­concert, she is probably going to be wearing very little clothes and it is all very ­sexual. So at what age do you allow your daughter to experience those kinds of visuals? Little Mix are the same, they are very provocative."

However, the Westlife star took to Twitter this morning to say that he never said those words, and was obviously picked up wrong.

"To clear up a recent article. I have never seen Little Mix in concert. I have played them a gazillion times on my radio show in the past and think they are a brilliant pop band, one of the best around in the past 7 years in fact [sic]. 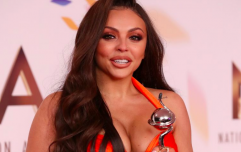 Jesy Nelson tears up as she accepts NTA award for documentary, Odd One Out

END_OF_DOCUMENT_TOKEN_TO_BE_REPLACED

"In a recent interview when Mark was mentioning Rihanna and wondering when would it be appropriate to let his daughter watch the show, I, having seen Rihanna live at the Aviva Stadium (world class show) tongue and cheek said I went to Rihanna and you would know when you're going to see her it's gonna be firstly, a brilliant show - sexual yes!" he said.

"Yes you have to decide when to allow your young daughter or son to go along. In the interview maybe one of the other lads mentioned Little Mix, but like I said I have never seen any of their shows."

He finished by saying he hopes everything is cleared up and told Little Mix to "keep doing your thing."

Little Mix will take to the 3Arena tonight, Thursday and Friday. Doors open at 6pm.

popular
10 Dublin restaurants with outdoor areas we'll be hitting up for the next 3 weeks
QUIZ: Can you name all 32 counties in Ireland in under 4 minutes?
Will there be a second season of Gilmore Girls: A Year In The Life? Here's what we know
Eight Of The Best Films And Documentaries On 9/11
Someone has ranked the penis size of men from all over the world
Here's what happens on every day of your menstrual cycle (roughly)
Tried and tested: 3 sheet masks that seriously impressed me
You may also like
10 months ago
Little Mix just released their first ever Christmas single and it's a festive banger
1 year ago
'Doctors told me I would die' Little Mix's Jade Thirlwall on her anorexia struggle
1 year ago
Chris Hughes and Jesy Nelson went for a hike up the Wicklow Mountains yesterday
1 year ago
Chris Hughes just compared Jesy Nelson to his mum, and we're cringing
1 year ago
Jesy Nelson and Chris Hughes have officially confirmed their relationship
1 year ago
Jesy Nelson and Chris Hughes are back together, according to Instagram anyway
Next Page