Did you snap up tickets?

The Pussycat Dolls' songs were the soundtrack to most of our teenage years, so we were pretty delighted to find out that they're making a comeback.

The band will tour around the UK and Ireland with tickets going on sale this morning.

However, even though we - and indeed the women themselves - are happy to be back together, the band's main singer, Nicole Scherzinger said that she struggled with their image back in the day.

It‘s so good to be back with my girls ??? Watch the full @pussycatdolls performance on the @itv hub at the link in my story! #PCDReunion #XFactorCelebrity

Speaking to The Guardian, Nicole said that her revealing costumes really bothered her. 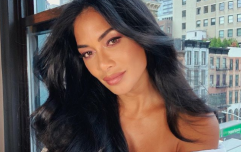 Rumour has it Nicole Scherzinger has a new boyfriend, and you'll definitely recognise him

END_OF_DOCUMENT_TOKEN_TO_BE_REPLACED

"In the beginning, it was a massive hump for me to get over. I was very conservative. I had really strong religious beliefs. I just wanted to make my mother proud."

Commenting on singers and stars these days, The X Factor judge said: "I’m a massive fan of all the cool kids out there, I’m not going to judge them. I just know, for myself, I like to try to be a little bit more… I don’t want to say demure, I sound like a prude – classy?"

The Pussycat Dolls first formed in 2005 until going their separate ways in 2010. The group is made up of Nicole, Ashley Roberts, Kimberly Wyatt, Carmit Bachar and Jessica Sutta.

popular
Curtain bangs are trending - here's everything you need to know
10 women on the relationship deal-breakers they learned the hard way
'Beard-baiting' is now apparently a dating trend - and we're all for it
Rose Leslie and Kit Harington share baby news with super cute photo
15 tattoo ideas you'll adore if you love the sea
Will there be a second season of Gilmore Girls: A Year In The Life? Here's what we know
4 things to know about Trump's Supreme Court pick Amy Coney Barrett
You may also like
9 months ago
The Pussycat Dolls announce first Irish date in 10 years, and we're SCREAMING
11 months ago
The Pussycat Dolls want Nicole Scherzinger to 'take a back seat' ahead of reunion
1 year ago
Jamie Redknapp asked Nicole Scherzinger on a date, and it did NOT end well
1 year ago
Strictly viewers spotted Nicole Scherzinger getting salty with Tess Daly last night
2 years ago
Louis Walsh responds to rumours he's been sacked by X Factor producers
2 years ago
Nicole Scherzinger dubbed 'attention seeking' after last night's X Factor
Next Page