Olly Murs has announced that he popped the question to longtime girlfriend Amelia Tank.

The singer and his bodybuilder fiance took a romantic walk on the beach when he decided to get down on one knee.

Updating fans about his relationship status on Instagram, Olly posted a picture of the couple and wrote: "04.06.2022 Amelia Tank.”

Olly previously said that Amelia was "The One" after the pair took a trip to Morocco at the start of their relationship.

He told New Magazine: “We both definitely knew. After two or three days, me and Amelia looked at each other and said, ‘yeah, this is kind of it now, isn’t it?’ We both told each other that we loved each other.

“When we came back from that trip, Amelia said, ‘I knew straight away that you were who I was going to spend the rest of my life with’, and I said the same.” 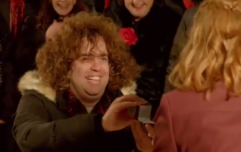 END_OF_DOCUMENT_TOKEN_TO_BE_REPLACED

Amelia also posted the picture, writing: "Here's to forever with you."

In a video of the proposal, Olly was seen embracing Amelia into his arms and shared a passionate kiss to celebrate their engagement.

Speaking to The Sun last year, Olly said: “If I balls this up, then I’m an idiot because it’s everything I want. Amelia is the person I’ll be with for the rest of my life . . . unless she gets rid of me! You just know, don’t you? And when I found Amelia, I knew this was it.

“We’ll definitely get married at some point and hopefully have a family and a great life. I think we’ve reached a point in our lives where we’re both ready for that next step.

“We love each other and we just want to live our lives together.”

popular
Molly-Mae Hague fans think they officially know her baby's name – and it means cloud
Baby found unattended in pram in Dublin, Gardaí reveal
"I feel like I lost myself": Nathalie Lennon on her mental health struggles and her latest project with Pieta
Joanna Cooper heartbroken after her mum is diagnosed with dementia
Conor Mcgregor hit by car ‘at full speed’ while cycling
Tasha Ghouri hits back at another islander who called her relationship fake
Gwen Stefani reportedly pregnant with baby number four
You may also like
1 year ago
Confusion as woman runs away from marriage proposal
1 year ago
TikTok star goes after viral after shopping centre marriage proposal rejected
2 years ago
Here is where you should get engaged, based on your star sign
2 years ago
Ladies, if you propose this Leap Day, you could get a FREE holiday to Iceland
3 years ago
Anti-engagement rings are now a big thing... BRB, just planning my own proposal
3 years ago
Here's the top engagement ring trend for 2019 and we're not one bit surprised
Next Page