It was one of the best TV shows of our time.

It's safe to say we were all a little obsessed with One Tree Hill. I remember watching reruns of it for hours in procrastination because I didn't want to study for my Leaving Cert.

Whether you were Team Lucas or Team Nathan (Team Nathan all the way), it brought all the drama and we were sad to see it end in 2012. 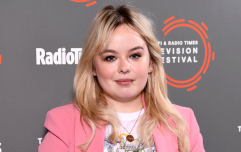 "I have a name:" Nicola Coughlan wants us to stop talking about actors' weight

END_OF_DOCUMENT_TOKEN_TO_BE_REPLACED

Well, there was a little One Tree Hill reunion at the InStyle and Warner Bros Golden Globes after party and the picture is everything.

Sophia Bush, Danneel Ackles and Bryan Greenberg (A.K.A. Brooke, Rachel and Jake) all snapped one of the iconic lift clips together and they look just as good as they did in their OTH days.

In the short clip, Bryan is seen holding and bouncing a basketball while Sophia and Danneel are waving gold pompoms beside him.

However, Sophia won the best caption award by saying: “After party at Karen’s Cafe, anyone?”

Anyone else feel like binge watching One Tree Hill now?

popular
Tributes pour in for designer Virgil Abloh following death at 41
8 of the hottest make-up trends to try this festive season
The best memes from this year's Late Late Toy Show
The internet is saying the same thing after Ryan's Toy Show opening
Strictly's Giovanni Pernice responds to dating rumours following split from Maura Higgins
Japan to close its borders to tourists to prevent Omicron spread
Vicky Phelan says terminally ill people should have right to decide how to die
You may also like
8 months ago
WATCH: Honest ad about breastfeeding struggles airs during Golden Globes
8 months ago
Chadwick Boseman's wife accepts Golden Globe award on his behalf
1 year ago
Colin Farrell's eyebrows won big at the Golden Globes last night
1 year ago
Our top 9 favourite looks from the Golden Globes red carpet
1 year ago
Did you spot Beyoncé proving yet again why she's Queen Bey at the Golden Globes last night?
1 year ago
Michelle Williams made a moving speech about women's rights at the Golden Globes
Next Page