People have a LOT to say about Bradley Cooper and Lady Gaga's Oscars performance.

As you may know, Bradley Cooper and Lady Gaga performed Shallow, their hit song from A Star is Born, at The Oscars last night and unsurprisingly, there was a major reaction from people watching at home.

The chemistry between them is just undeniable as you'll know if you've watched the film and indeed from looking at them when they're being interviewed etc. 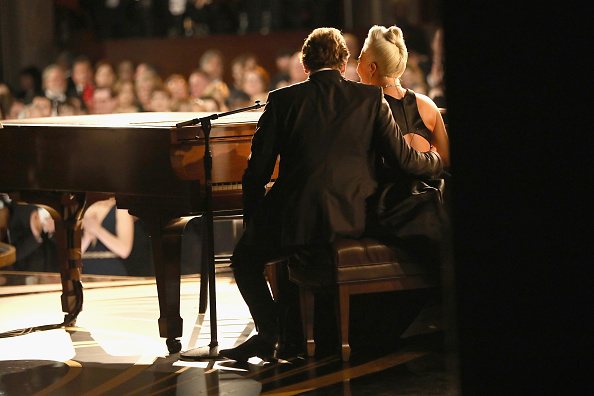 This was evident again last night and the performance received a standing ovation from the audience in the Dolby Theatre.

Lady Gaga and Bradley Cooper receive a standing ovation after performing "Shallow" at the #Oscars https://t.co/lTYkhkBuUt

Those watching on their TV screens were also quick to share their thoughts and of course, Twitter was ablaze with people gushing about them.

Cant stop watching over and over again that Lady Gaga and Bradley Cooper performance at the Oscars last night. What a performance!!! #Shallow #AcademyAwards #Oscars #AStarIsBorn #LadyGaga pic.twitter.com/22NGpAkFtk

Lady Gaga and Bradley Cooper singing "Shallow" at the Oscars though... That chemistry, the power they have... pic.twitter.com/xP2qK6ooLy

Why did I watch Lady Gaga Bradley Cooper's Oscars Shallow performance and cry only to watch it all over again and cry? So beautiful ? #Oscars

Wow. The chemistry between Gaga and Bradley.
Wow. #shallow #Oscars2019

Lady Gaga and Bradley completely had me lost in everything when I was watching the performance of shallow. It fully took me away. Their chemistry is insane ❣️

Despite the fact that Bradley's partner, Irina Shayk, was sitting in the audience watching, people seemed to forget that he is in a relationship and were convinced that the pair would kiss.

I actually thought Lady Gaga and Bradley Cooper were going to kiss while performing 'Shallow.' I still feel a tingle in my spine. ?'

Lady Gaga and Bradley Cooper performing #Shallow live on stage was the best thing of the day. They were so close in the end I wanted a kiss #AStarIsBorn #AcademyAwards

Me watching the Shallow performance hoping Bradley and Gaga would unexpectedly kiss pic.twitter.com/yC1Gc4Ppag

popular
Get ready to live like the stars because Lidl is selling an entire home cinema range
These sustainable Irish sweaters are making people smile, and they're back in stock tonight!
Lookdown looks: I was wearing tracksuits 24/7 before it was cool
#Covid-19: People should limit themselves to one sexual partner, says Dr Holohan
The Skin Nerd on updating your lockdown skincare routine, and picking spots - if you HAVE to
Brown Thomas and Arnotts to phase reopening from next week
'It's a little different': Stylist Lawson Mpame on Ireland's 'subtle' racism
You may also like
4 weeks ago
"Wish we were all together" - Vanessa Bryant finds unopened card written by husband Kobe before his death
4 weeks ago
Daniel Radcliffe has kicked off a celebrity reading of Harry Potter and we're going back to Hogwarts
4 weeks ago
Adele stepped out with a stunning new look in her birthday post
4 weeks ago
Grimes and Elon Musk welcome first child together, 'X Æ A-12'
1 month ago
7 celebrity podcasts that are actually worth listening to
1 month ago
Tom Hanks donates blood plasma for #Covid-19 research
Next Page