People are LOSING their minds over one detail from the photocall with Baby Sussex.

Meghan Markle and Prince Harry introduced their son to the world today with a photocall that was broadcast by a number of major TV stations.

The new parents couldn't have looked prouder and the fact that Prince Harry was carrying his son was one detail that people couldn't stop commenting on. 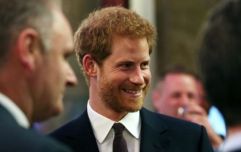 END_OF_DOCUMENT_TOKEN_TO_BE_REPLACED

A dad cradling his newborn really shouldn't be such a big deal given that he is his father but it shows how many are programmed to think that only mums should be doing these things.

Madness really and it's fair to say that this decision massively divided social media users who all took to Twitter to voice their thoughts.

Some said they loved seeing Prince Harry carry his baby, others noted that it's not a big deal (and why is this even being talked about) while some commented that Meghan may not be feeling well after having just given birth and so, Harry offered to help.

Whatever decision was made, it really shouldn't come as such a surprise but nonetheless, it's been one of the major talking points from today's photocall with a very famous baby.

Love that Harry is holding the baby!

This is really stupid but it makes me so happy that in all the pictures I’ve seen of the new royal baby so far, Prince Harry is holding their new son and he looks ecstatic ??

It’s interesting that prince Harry came out holding the baby. Not sure how I feel about that. Dads are great too butttt moms for the win

Harry just being a dad and yes, every dad should be the exact same in this situation. That is ALL.

People are losing their sh!t because Harry was carrying/holding the baby, saying how “modern” they’re becoming. It’s HIS baby! He should carry, care for, diaper, feed etc. as much as the other parent! Why am I even writing about this, I could care less.

While I am pretty much always a heart of stone, the royal baby nonsense has made me even more so. People applaud Harry for holding the baby... Right... A dad held a baby? Seriously people, get a life ??‍♀️

Girls With Goals || Her · Ep.161: Feeling Peachy - Sharon Keegan of Peachylean on being an absolute BOSS!
popular
Big Brother star left temporarily blinded and scarred after TikTok DIY beauty 'hack'
Someone has ranked the penis size of men from all over the world
More footage of Tristan Thompson cheating on Khloe has emerged
Is that Seth Rogen without a beard?
How to INSTANTLY unblock your stuffy nose (we swear this works)
Fantastic Beasts star Kevin Guthrie jailed for three years following sexual assault
Khloe Kardashian has JUST confirmed she is pregnant
You may also like
4 weeks ago
TV host makes baffling remark about Meghan Markle's 'reaction' to royal family photo
1 month ago
Prince Harry and Meghan Markle announce first Netflix show
1 month ago
Alex Beresford quit social media over "relentless racist abuse"
1 month ago
Kate Middleton's uncle says Duchess "doesn't have a mean bone in her body" after Oprah interview
1 month ago
Piers Morgan in "£10m bidding war" after Good Morning Britain exit
2 months ago
"Cry not..." Suits' Patrick J Adams responds to Piers Morgan leaving GMB in typical fashion
Next Page