"There seems to be a curiosity about me."

The past few years have seen comedian Pete Davidson establish himself as a bit of a Hollywood Casanova, and he's only too aware of it himself.

The SNL star was famously engaged to pop superstar Ariana Grande before they called it quits, but he has also been linked to Bridgerton star Phoebe Dynevor, model Kaia Gerber and actress Kate Beckinsale.

END_OF_DOCUMENT_TOKEN_TO_BE_REPLACED

Over the past few months, he's been spotted getting cuddly with Kim Kardashian.

Addressing the speculation, Pete himself commented on his love life - and his undeniable appeal - at the 9th Annual Patrice O'Neal Comedy Benefit Concert.

There, he said: "There seems to be a curiosity about me, is what my friends tell me.

"I was trying to figure out how to explain myself to someone because I was doing an interview." 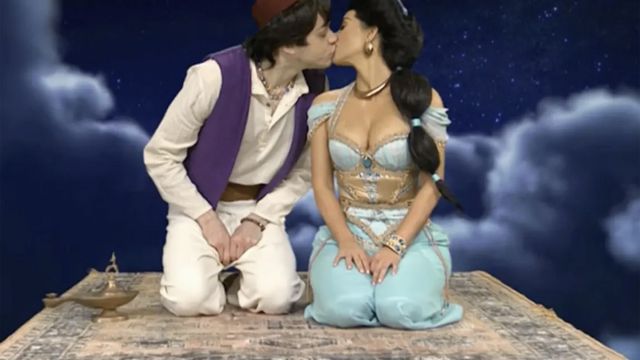 END_OF_DOCUMENT_TOKEN_TO_BE_REPLACED

Pete then self-deprecatingly compared himself to the the DVDs one might find going for discounted prices in American grocery stores. He cited examples like Tropic Thunder, Shrek Forever After and Predator 2.

He then said that while it's often placed in the discount bins, Tropic Thunder doesn't belong there, because, as he says, it's a classic.

END_OF_DOCUMENT_TOKEN_TO_BE_REPLACED

Well there you go.

Speculation that Pete was dating Kim began last year when they were snapped holding hands while riding a roller coaster together in Knott's Berry Farm in California.

Then, in November, a source close to the couple claimed that they were officially dating.

The insider told E! News: "They are really happy and seeing where it goes. Pete has told her he doesn't want to see anyone else, he is telling some people they aren't super serious but she isn't seeing anyone else... She's trying to not make a big deal about it but is super into him."