Whether you agree with the concept or not, there is no denying that Peter Andre didn't hold back when it came to buying his wife a gift to commemorate the birth of their baby boy.

It is the couple's second child together. They have a two-year-old daughter, Amelia, who Peter affectionately calls 'Mills'.

Now the proud dad has revealed that he bought his wife, Emily, a very extravagant present after the birth.

In his regular column for New! Magazine, the singer said he felt he had to go all out because she really deserved it:

"I wanted to buy Emily a present for giving me our beautiful son, so I bought her a diamond-encrusted Gucci watch. When I gave it to her, I told her, "You better love me now!"

Last night he uploaded this cute picture which shows father and son yawning together with the caption 'We must be related, wait, we are...awesome"

Theodore was breach which resulted in the operation, but Peter says he is taking a very active role in helping with their toddler while his wife recovers:

"She's recovering well but she can't do things like lift Mills, which I think is what Mills has found the hardest, so I've had to take on a much more prominent role at the moment with her." 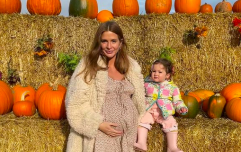 END_OF_DOCUMENT_TOKEN_TO_BE_REPLACED

He says they would like more children together in time. The Mysterious Girl singer already has two children with his ex-wife, Katie Price; Princess (9) and Junior (11).

What do you think of the idea behind a push present? Well deserved or a frivolous indulgence?

popular
The internet is saying the same thing after Ryan's Toy Show opening
Vicky Phelan says terminally ill people should have right to decide how to die
You can rent out the house from House of Gucci on Airbnb
The best memes from this year's Late Late Toy Show
Strictly's Giovanni Pernice responds to dating rumours following split from Maura Higgins
We finally know what happened to Sam in And Just Like That
Omicron variant symptoms are mild so far, says doctor who discovered it
You may also like
2 months ago
Bookies seem to think Una Healy and Maura Higgins will appear on 'I'm A Celeb' this year
3 months ago
Kim Kardashian addresses "nasty" Kate Middleton comparisons while pregnant
4 months ago
MTV Cribs is coming back to our screens next month
4 months ago
Lottie Ryan says son Wolf is a "gift from dad" Gerry Ryan
4 months ago
Police called to Rihanna's house after man breaks in
5 months ago
Journalist fired for racist tweet about Harry and Meghan's newborn daughter
Next Page