He's a dad to four children - two with his ex-wife Katie Price, and two with his current spouse, Emily MacDonagh.

But Peter Andre says the process of becoming a dad actually began with Harvey, Katie's now 15-year-old son from her relationship with footballer Dwight Yorke.

Harvey is largely blind. He also has autism and a genetic condition called Prader–Willi syndrome. 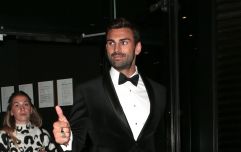 END_OF_DOCUMENT_TOKEN_TO_BE_REPLACED

Speaking on KIIS FM in Sydney, Peter said: "The first child that taught me how to be a dad was Harvey." He went on to state that he's also a strict parent - having been brought up by a "super strict" dad himself.

"Junior is a very polite boy, I'm a bit too strict on him unfortunately. But I think that being strict on them will pay off in the long run," Mr Andre, 44, explained.

"I mean, they roll their eyes at me all the time, telling them to have manners and to be respectful to people and all those sort of things."

END_OF_DOCUMENT_TOKEN_TO_BE_REPLACED

Peter and Katie, 39, divorced in 2009 after four years of marriage and she has in the past accused him of not seeing Harvey.

Speaking on Loose Women in September, Ms Price said: "When you divorce you have to share the kids, but with Harvey there is no one.

"Look, Dwight (doesn't) want to know... someone else doesn't see him anymore - he's just got me."

But speaking to Now magazine a year ago, Peter said: "There's always room for Harvey at our house. I always saw him as my own.

"There's a special place in my heart for him - he's very important to me and he's always welcome. It's just lovely to see him."