PIC: This 9-Year Old Had The BEST Reason To Miss School Yesterday

When you’re nine years old, you’ve probably tried a lot of excuses to get out of school.

Whether it was flu, mumps, a temperature caused by resting a thermometer on a radiator, or an exaggerated cough, the number one aim was to get a legitimate note to hand up to your teacher. 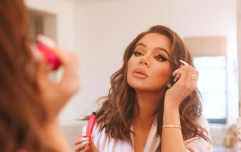 Instagram v reality: Why are we so fascinated by "normal" photos of celebrities?

END_OF_DOCUMENT_TOKEN_TO_BE_REPLACED

When nine-year old Ollie Olsen wanted to head along to watch Hillary Clinton at a campaign rally, the child decided he’d write the note himself.

But just in case anyone doubted where he was that day, Hillary herself decided to personally sign the letter… just to prove it was legitimate.

If you have to miss school, make sure you have a note. pic.twitter.com/JAZEZFAWwP

We’re thinking this is definitely the best excuse we’ve ever witnessed.

Girls With Goals || Her · Ep.161: Feeling Peachy - Sharon Keegan of Peachylean on being an absolute BOSS!
popular
The DIY frozen coffee recipe that's so delicious you'll never pay for an iced latte again
Khloe Kardashian has JUST confirmed she is pregnant
How to INSTANTLY unblock your stuffy nose (we swear this works)
Someone has ranked the penis size of men from all over the world
Summer fashion: I got my entire staycation wardrobe sorted with these 7 buys
Here's what happens on every day of your menstrual cycle (roughly)
'They're Dead To Me Now' - Kate And Oliver Hudson Have Been Disowned By Their Father
You may also like
2 months ago
Couples who post more selfies are less happy, says study
2 months ago
Woman goes viral on TikTok after posting picture of wine glass without noticing reflection
3 months ago
Instagram bans adults from messaging users who are under 18
4 months ago
Bebo, the greatest social network of all time, is returning to save us
6 months ago
David Attenborough quits Instagram just two months after joining
7 months ago
3 things I've done to make my Instagram feed better for my head
Next Page