Sometimes a celebrity breakup hits us harder than one of our own.

Miley Cyrus has broken up with her boyfriend of ten months, singer, Cody Simpson. The pair are two of the most famous people in the world in their own right and when they got together it seemed like a match made in celebrity heaven.

They started dating in October after Miley split with her then girlfriend Kaitlynn Carter. From the moment they met social media was alive with the two posting some very cute content including couple dances... and everything else you'd imagine two loved up celebrities would post to make everyone else feel like their love was irrelevant!

Miley took to Instagram live to confirm the split and explain the situation. She said "A year ago, almost to this exact date, the media tried to tell my story for me, and control my narrative, and I'm just not accepting that. So today, it came out that me and my boyfriend have broken up."

Happy birthday baby. Thanks for being you

"But right now, two halves can't make a whole and we're individually just working on ourselves to become the people that we wanna be, like everybody else at this age."

"We've been friends for 10 years and we're going to continue to be friends, so just don't make it something that it is not." 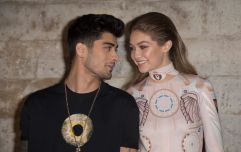 END_OF_DOCUMENT_TOKEN_TO_BE_REPLACED

Just a few weeks ago they were together posting all over Instagram and TikTok. Just goes to show you never really know what's going on behind closed doors or in this case, behind Instagram filters!

Miley Cyrus has just released her new single "Midnight Sky", so she'll be kept busy with that for the next while.

We wish them both the best!

popular
Will there be a second season of Gilmore Girls: A Year In The Life? Here's what we know
QUIZ: Can you name all 32 counties in Ireland in under 4 minutes?
Edward from Jedward has confirmed that he is not single anymore
Fact Not Fiction: Just how much do you know about vaginas and sexual health?
Kate Middleton has addressed the rumours that she's pregnant with her fourth child
Someone has ranked the penis size of men from all over the world
QUIZ: How well do you really remember the first episode of Sabrina The Teenage Witch?
You may also like
1 month ago
Everybody loves Jedward now
1 month ago
Tributes pour in for RuPaul's Drag Race star Chi Chi DeVayne, who has died, aged 34
1 month ago
Britney Spears asks court to end father's control over her life
1 month ago
A musical about the life of Princess Diana is coming to Netflix
1 month ago
We now know what Meghan Markle wore on her first date with Prince Harry
1 month ago
Chrissy Teigen shows off baby bump for the first time and she is glowing
Next Page