Fans speculate that Rihanna is pregnant after appearance at Diamond Ball

Fans of Rihanna's have gone into overdrive amid rumours that she is pregnant.

The singer-turned-beauty and underwear mogul has been taking over the world with her business ventures. This week there was speculation that motherhood was next on the cards for her.

It was Rihanna herself who ignited the rumours when she told a magazine; "I’m going to give birth to a black woman.” 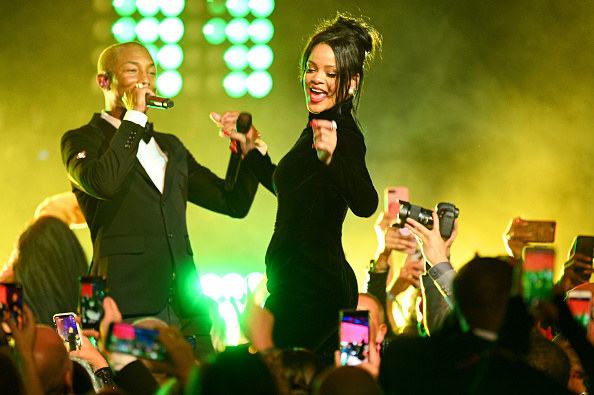 Rihanna and Pharrell Williams perform at the Diamond Ball in New York City.

"My mother is an incredible example of how to fight through obstacles in life," she continued. "I’m sure her mom taught her that and that’s how I’m going to be.

The statement sounded fairly general but many fans took it as an announcement.

if rihanna is pregnant and im not the fucking dad or the baby... i dont want it pic.twitter.com/ynzFtLOKUo

Who tf got Rihanna pregnant? pic.twitter.com/vMCLL7Pypm

But Rihanna has poured cold water on the rumours, letting fans know that she's definitely not expecting to be a mum any time soon.

"Sources with direct knowledge" of the singer (i.e. her rep) told TMZ that the singer is not pregnant.

Rihanna has been dating Arab entrepreneur Hassan Jameel since 2017.

popular
10 Dublin restaurants with outdoor areas we'll be hitting up for the next 3 weeks
Gardai investigating "all circumstances" as young woman is found dead in Dublin apartment
WATCH: Netflix to release documentary on the Watts family murder
New documentary sheds light on hidden sexual violence of the Irish revolution
The Christmas movies TV channel is launching this week
"I was petrified and wanted a hand to hold:" Irish women call for the ease of maternity restrictions
A gynaecologist has given the tampon its first notable redesign in 80 years
You may also like
1 week ago
Amy Huberman and Brian O'Driscoll expecting third child together
3 weeks ago
Ed Sheeran and wife Cherry Seaborn have welcomed their first child
3 weeks ago
Katy Perry and Orlando Bloom welcome first child together
3 weeks ago
Girls Aloud's Sarah Harding is battling advanced breast cancer
3 weeks ago
Jamie Lynn Spears appointed Britney's trustee to protect finances for children
4 weeks ago
Everybody loves Jedward now
Next Page