The Rob and Blac Chyna saga was always a dramatic one from the moment they got together.

Now it seems that it has taken a turn for the worst just weeks after their adorable baby Dream was born. 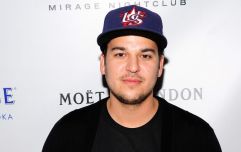 END_OF_DOCUMENT_TOKEN_TO_BE_REPLACED

Several messages emerged in which Chyna was speaking to her Lawyer, Jaden Smith and rapper Young Thug. In the messages she called Rob 'fat', 'lazy' and 'insecure' followed by "Imma give Rob 1 year to get it together. Or I'm gone."

Following this, Rob Kardashian posed a series of Snapchat and Instagram videos and messages claiming that Chyna had left him and taken their daughter Dream.

''Sorry to be so open but I'm not feeling so good after seeing @blacchyna messages about me and what her plans were. I have never been this heartbroken in my life. I don't mind being so open or if anyone thinks I'm being weak but I don't play when it comes to Family and Chyna was my Family and thought we were getting married. I treated her as a Queen.

My baby girl is 1 month old and Chyna took her and left this beautiful home that I just bought for us. Right before Christmas. Someone I have given my all too. I Loved every inch of that woman and loved everything that came with her. I truly loved Angela. I gave everything I owned for her. Didn't know I was just part of her plan. I really believed she was in love with me the way that I was with her and I am so hurt and never felt this before. It's different when you have a kid with someone. And after reading Chyna's messages to her best friend she was going to drop me after a year. She didn't even make it to that. I am so broken. This is a woman I fought my entire family for. I was in love with this woman to the fullest and I was none of that to her.''

In a Snapchat shortly after, Rob reiterated his feelings.

''I thought this was going to be the best year of my life ,,, had a beautiful baby Dream and haven't spent Christmas with family in years and I just can't believe she really hurt me this way. She knows how to hurt me and I loved her so hard like I'm supposed to. Like any man is supposed to love their Wife. Chyna knew exactly what she was doing to get me. I can't believe she did this to me.''

''And this isn't for some ratings this is my real life so please understand I'm just being open right now. Cuz if it was for ratings I wouldn't explain all this here. And with Chyna's messages and her leaving with everything and the baby I am broken. I go 1000 percent for my girl. I am so confused how a man who gives and loves everything about a woman is the one left alone. ? I'm sorry for being so open once again ,,, this is killing me ?''

Despite talking about being heartbroken and devastated, Rob took an unusual approach to the situation by posted a series of pop culture memes about Chyna leaving.

popular
14-year-old boy charged with murder of 12-year-old Ava White
The new restrictions likely to be introduced as NPHET meets with government
Toy Show's sign language interpreter Amanda Coogan hailed a "national treasure"
This year's Late Late Toy Show has broken Irish TV records
8 of the hottest make-up trends to try this festive season
The best memes from this year's Late Late Toy Show
Remember Christian From Clueless? This Is What He Looks Like Now
You may also like
3 years ago
So, Rob Kardashian just sold his sock line... to his mother
3 years ago
Kylie Jenner shares first look at newborn Chicago in baby reveal video
3 years ago
People think Rob Kardashian may have revealed Kimye's baby name early
3 years ago
Make it STOP! Kylie posts a picture of her holding a newborn on Snapchat
4 years ago
Blac Chyna drops all Kardashian sisters except one from her lawsuit
4 years ago
Blac Chyna is suing the Kardashians for physical abuse over nude pics
Next Page