Robbie Williams and Ayda Field are reportedly planning to spend their daughter's first birthday with her surrogate mum.

The couple announced last September that they had welcomed a baby girl named Colette, or 'Coco'.

At the time, they praised their "incredible surrogate" whom they said they would be "eternally grateful" to.

"We are over the moon to have this beautiful baby girl in our lives and so blessed that we live in a world which makes this possible."

Now, the couple are said to be keen to remain "close" with the surrogate - and are reportedly planning to celebrate Coco's birthday with her in Hawaii next month.

An insider told The Mirror that Field and Williams are planning a massive party as a way to show their appreciation for the surrogate.

“Robbie and Ayda want to have a close relationship with the woman and plan to spend the holiday with her. They’ll stay in a rented apartment separate to her.

“They’re planning a big party as a joint thank-you and first birthday.” 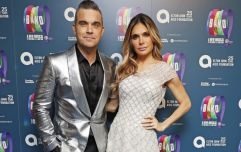 Ayda Field and Robbie Williams have welcomed their fourth child

END_OF_DOCUMENT_TOKEN_TO_BE_REPLACED

The news comes a few months after the couple announced they would not be returning as judges for the new season of The X Factor.

Williams said a the time that it had been a "very busy year", and as such, they were "gutted" to announce they would be unable to reprise their role as judges.