Robbie Williams won't be singing his most iconic song anymore

Robbie, why do you hurt us so?

The first ones that spring to mind are probably Millennium, She's The One, and perhaps even a bit of Rock DJ. 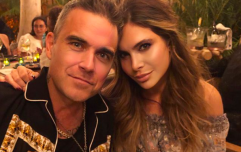 END_OF_DOCUMENT_TOKEN_TO_BE_REPLACED

And of course, the unforgettable, the iconic, Angels.

It's a song that has dominated karaoke sessions for years, reduced people to tears, and probably changed a lot of our lives to be honest.

And now, Robbie won't be singing it anymore.

What did we ever do to deserve this?

Robbie told the Daily Star that he was planning on not including the track in any of his future tours because singing it has become too difficult for him.

"I have to hold myself together or I could cry at everything and look pathetic.

"There are people who put posters up before Angels about their mum or dad who died and I think ‘Oh God, I am going to cry’. It did affect me."

Nothing wrong with a bit of crying every now and again, man.

It soothes the soul. END_OF_DOCUMENT_TOKEN_TO_BE_REPLACED

We do, however, understand Robbie's decision... even if we are a bit devastated by it.

That being said, the 43-year-old revealed that he is planning an Under The Radar gig because fans have been asking him to so at least there's that.

Under The Radar was a compilation of B-sides and rarities released by Robbie last year.

It included the likes of 9 to 5, Satellites, Numb, and My Fuck You To You.