The model shared a post to mark World Prematurity Day.

Rosanna Davison has urged her fans to acknowledge the challenges faced by premature babies and their parents.

Taking to Instagram, Rosanna shared a throwback image from the day of her final routine scan while pregnant with her boys, Hugo and Oscar, as well as a video of her baby bump.

The twins were premature and had to be delivered through emergency C-section.

"Throwback to this day last year and my final twin bump pic in hospital while being monitored by the wonderful team @nationalmaternityhospital," she wrote.

"Hugo and Oscar weren’t due for almost another week when I attended my final routine scan this day last year. It was discovered that Oscar had grown significantly more than Hugo during the previous fortnight.

"I was told it was due to placental resistance in the final few weeks of pregnancy as they shared the placenta, so it was decided that the boys would need to be urgently delivered via C-section."

Rosanna said she had noticed how one side of her bump was bigger than the other throughout the pregnancy, as the side that Hugo was on was smaller. END_OF_DOCUMENT_TOKEN_TO_BE_REPLACED

"All was well in the end and my twinnies were born safely the next morning. They arrived at 35 weeks and spent just a week in the NICU being cared for by the most kind, reassuring, supportive and experienced team.

"We were lucky that they were in good health and were sent home with their proud parents after just a short stay compared to so many other babies."

She went on to stress the importance of World Prematurity Day. 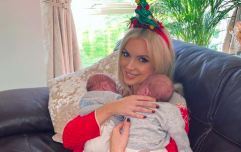 END_OF_DOCUMENT_TOKEN_TO_BE_REPLACED

"I think it’s important to acknowledge the numerous challenges faced by premature babies and their parents, and to be grateful for the teams of nurses, doctors and consultants who work incredibly hard to ensure that premature babies survive."

Rosanna's followers praised the model for speaking up, with some sharing their own experiences of having a premature baby.

"Beautiful post. I love seeing the bump movement, it's such a wonderful feeling," one person wrote.

"Another twin premmie mommy here. Sending love to everyone who has has a oremature baby near and far," a second person said.