Charmed actress Rose McGowan has claimed that she has been fired by her agent for her attempt to expose sexism in Hollywood.

The star recently posted a casting note to her Twitter account, revealing that she had been asked to wear tight clothing and a push-up bra to an upcoming audition. 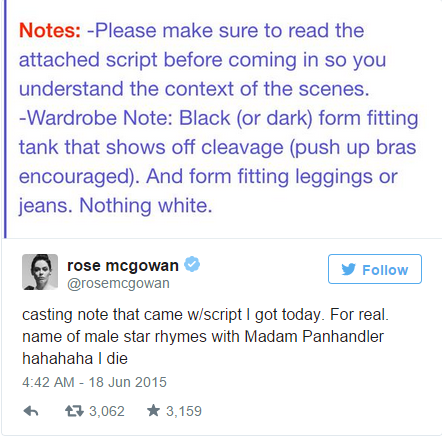 McGowan received a flood of online support from women on her decision to speak out about attitudes within the industry but has since returned to the social network to reveal that she has been dropped by her agent.

I just got fired by my wussy acting agent because I spoke up about the bullshit in Hollywood. Hahaha. #douchebags #awesome #BRINGIT

The awesome thing about being an artist? You can't be fired from your own mind. #FREEDOM

popular
Wagatha Christie: Rebekah Vardy storms out of court just 30 minutes into final day
Claire Byrne Live viewers in shock as woman shares family DNA secret
Only a matter of time before monkeypox spreads to Ireland, says expert
Here's the top 10 Louis Theroux docs streaming on Netflix right now
Why Are Men so Obsessed With Boobs? The Answer is Pretty Surprising...
Idris Elba and Sabrina Dhowre confirm they have welcomed a baby boy
Denis Sulta had a cameo in Derry Girls alongside his girlfriend Saoirse-Monica Jackson
You may also like
2 weeks ago
Vogue Williams' shares her baby boy's name
3 weeks ago
James Bond actor Kenneth Tsang 'dies in quarantine hotel', aged 87
4 weeks ago
Priyanka Chopra and Nick Jonas name their baby girl, Malti
1 month ago
Channing Tatum was in Wexford over the weekend
1 month ago
Brooklyn Beckham and Nicola Peltz take each other's last names at Florida nuptials
1 month ago
The first photos from Brooklyn Beckham and Nicola Peltz' wedding are here
Next Page