Such an adorable framed photo.

We previously noticed that a very sweet snap of the Duke and Duchess of Cambridge has a home at Buckingham Palace and it turns out George and Charlotte feature in another special framed photo.

Yes, as you'll see below, the two children were photographed alongside their grandmother, Queen Elizabeth II, in the photo.

This discovery was made recently when a new portrait of the Queen was unveiled after artist Stuart Brown visited the royal residence to present her with the artwork.

The RAF Regiment commissioned artist Stuart Brown to paint a portrait of The Queen who is Air Commodore in Chief of the RAF Regiment. The portrait shows The Queen in the White Drawing Room at Windsor Castle. pic.twitter.com/CZHJ8TNhIk

The Queen, Prince George and Princess Charlotte are pictured with Isla and Savannah Phillips, you may recognise her as George's partner in mischief-making, more on that here, and Zara, eldest daughter of Zara and Mike Tindall. 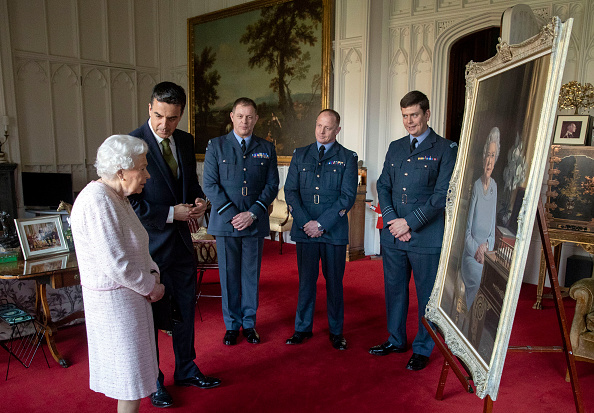 You can see the framed photo in question to the left of the Queen in the above image.

END_OF_DOCUMENT_TOKEN_TO_BE_REPLACED

However, Prince Louis, youngest son of Prince William and Kate Middleton, and Lena, Zara and Mike's second daughter are missing as both children weren't born at the time the photo was taken.

Of course, royal fans are delighted with the snap and it's been getting lots of attention on social media.

Here's hoping we see another photo with all the kids included and as the Cambridge family usually release a Christmas greeting card, we might get another glance at little Prince Louis soon.

This isn't the first time we've been treated to a sneak peek of the photos the Queen has framed and it's clear that there are some lovely family snaps on display.


popular
Zara's €20 top comes in eleven different colours and it's the cosy comfort we need
These €26 Zara trousers are the next best thing to tracksuit pants (and they come in three colours)
Check out the €20 New Look bargain that's just too good to miss out on
Vogue Williams and Spencer Matthews' reality TV show has reportedly been cancelled
What the hell is going on with Houseparty?
The salted crème egg fudge recipe that is the perfect Easter treat
Season 16 of Grey's Anatomy begins in Ireland tomorrow night and the excitement is real
You may also like
1 week ago
Kate Middleton's stunning pink suit is from M&S and it's still in stock
3 weeks ago
Kate Middleton and Prince William share adorable photo from their tour of Ireland
4 weeks ago
Supermac's to give free dressed fries to anyone named Will or Kate during their Galway visit
4 weeks ago
Details of Prince William and Kate Middleton's visit to Ireland have been released
1 month ago
Kate Middleton's new runners are from M&S and you can pick them up for €42
1 month ago
'William didn’t feel he could do much to help': Kate Middleton opens up about her experience with severe morning sickness
Next Page