Ryan Murphy has announced his five-year-old son Ford is "cancer-free."

The Glee creator revealed the news during Variety's Power of Women event earlier this week, while presenting an award to Dana Walden, who was being honoured for her work at the  UCLA Jonson Comprehensive Cancer Center.

“Three years ago my beautiful son Ford went for a standard typical 18 month exam," he began, according to PEOPLE. Thankfully, Ford caught "at the exact right moment" during the check up.

“He sat up, she was able to press her fingers in a bit deeper, Her eyes widened. Something was not right. From that moment came a day of terror and scans," Murphy recalled, before adding that the doctors found the toddler has neuroblastoma.

“My baby had a tumor the size of a tennis ball at 18 months growing behind his abdominal wall. And the doctor said this was bad," the American Horror Story creator said.

The 53-year-old reached out to Walden, the godmother to both of his children, after finding out about Ford's diagnosis. He recalled how the little boy went through a long surgery and "years of intense exams, which required hours and hours of anaesthesia." 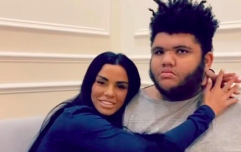 END_OF_DOCUMENT_TOKEN_TO_BE_REPLACED

And while he said he hasn't been able to "emotionally recover" from it all, his son has.

“I am so proud to proclaim that he is cancer free,” Murphy said.

He also revealed his family had made a $10 million donation to the Children's Hospital where Ford had been treated by Walden.

“There is now a wing dedicated under Ford’s name that specializes in helping children without our resources.Children without a champion like we had in Dana Walden.”

popular
QUIZ: Can you guess the TV series from the intro lyrics?
Body found in search for missing Glee star, Naya Rivera
Katie Price's son Harvey taken to intensive care at risk of organ failure
These €40 Lost Stock fashion boxes are helping support factory workers in Bangladesh
5 absolute essentials for when you're having the gals over for a summer evening soirée
Will Smith admits to 'failing miserably' in 21-year marriage to Jada Pinkett Smith
'She fought a courageous fight' - Actor Kelly Preston dies aged 57 from breast cancer
You may also like
3 hours ago
Body found in search for missing Glee star, Naya Rivera
1 week ago
UPDATE: Gardaí have found 23-month-old Jasmine Arshad safe and well
1 week ago
Broadway actor Nick Cordero dies following Covid-19 complications, aged 41
1 week ago
Ghislaine Maxwell, former girlfriend of Jeffrey Epstein, arrested by the FBI
1 week ago
"I never thought it would be cancer": Stage 4 melanoma patient recalls receiving her diagnosis
1 week ago
Harvey Weinstein victims to receive $19 million settlement
Next Page