A third is on the way.

The reality TV realtor announced on her Instagram on Thursday that she is pregnant, posing alongside her husband on a rooftop overlooking the Miami skyline.

Smiling next to him, her husband as he cradled her baby bump, she wrote: "Here we go again...baby number 3 will be our Christmas/ Chanukah present!"

The couple already share two children, Aiden who is two and Elle who is one.

Her friends and co-workers quickly jumped to the comments to congratulate the happy couple on their new addition.

Christine Quinn wrote: "Omgggg I'm so happy for you!!!!!" 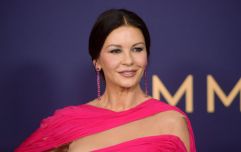 END_OF_DOCUMENT_TOKEN_TO_BE_REPLACED

Seasons 4 and 5 of Selling Sunset are currently being filmed but Netflix is yet to announced when we'll get to see them.

Rumours began recently that Maya was leaving the show, but she was quick to shut them down.

"No, I'm not leaving. I'm staying with Jason [Oppenheim]," Vander told PEOPLE, referring to the President and Founder of the luxury real estate company the show surrounds. "I'm actually working with a few potential, very good clients with him in L.A. Just focusing on Miami a lot, but I have a couple of pretty interesting clients that I might have to make the trip to L.A. for."

popular
Fashion detox: All you need for the perfect wardrobe is 37 items of clothing
Gwen Stefani reportedly pregnant with baby number four
Woman returns to Zara in a jumpsuit after getting stuck trying it on
Why Are Men so Obsessed With Boobs? The Answer is Pretty Surprising...
The First Quadrillionaire? Paypal Accidentally Gives Man $92 Quadrillion
Cristiano Ronaldo has been called 'racist' for his latest Instagram post
Nespresso just launched the most perfect autumn flavoured coffee capsules
You may also like
2 days ago
It looks like the last few months of Diana's life will be on The Crown
2 days ago
The first look of season two of Emily in Paris is finally here
3 days ago
Tiger King season 2 is officially hitting our screens
4 days ago
Netflix to adapt Matilda and Charlie and the Chocolate Factory in huge Roald Dahl deal
4 days ago
My Unorthodox Life on Netflix is getting a second season
5 days ago
Virgin River has been renewed for a season 4 and 5
Next Page