Over the weekend the cast of Sex Education took a little field trip to London Fashion Week to attend Henry Holland's A/W19 showcase.

Sitting in the FROW, leading actors Emma Mackey (Maeve), Ncuti Gatwa (Eric) and Aimee Lou Wood (Aimee) took their seats to watch the new collection of art and colour debut down the runway.

But, without her heavy liner and blonde/pink tresses, it took us a minute before we actually recognised the angsty breakthrough star of the show. 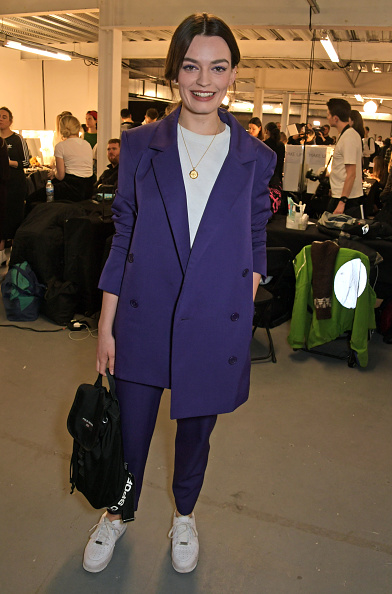 Wearing a slick purple suit themed with a pair of Nike runners, we adore Emma's style and simplistic hair and makeup.

Emma's love interest in the smash series, Kedar Williams-Stirling (Jackson) sat behind the star for the event alongside other actor's Connor Swindells (Adam) and Patricia Allison (Ola).

The only notably missing star was leading man Asa Butterfield (Otis) but thankfully, they'll be re-grouping soon as the series has been confirmed for a second season.

On the renewal, the series creator, Laurie Nunn, said:

“The reception to series one has been so exciting. Seeing how people across the world have connected to characters that began as ideas in my head is incredible.

"I’m hugely grateful to every person that has taken the time to watch the series, and I can’t wait to continue this amazing journey.”

“Laurie Nunn has captured the awkward teenage experience with a lot of heart and humour in Sex Education.

“Along with the Eleven team and executive producer and director Ben Taylor, she’s created a universally relatable series that has resonated with our members around the world.”

We cannot wait for it to return to our screens.

You can watch all eight episodes of Sex Education season one on Netflix now.

popular
Aldi's pet event is back and yes, those are hooded parkas for dogs
WATCH: Former classmate of Paris Hilton opens up on reform school experience
Here's what happens on every day of your menstrual cycle (roughly)
This is how much 91-year-old Queen Elizabeth drinks every day
Curtain bangs are trending - here's everything you need to know
Dirty Dancing officially arrives on Netflix today and that's our Sunday sorted
Daniel O'Donnell announces his first live streamed concert
You may also like
1 day ago
First look: Princess Diana and Margaret Thatcher in The Crown season four
6 days ago
Will there be a second season of Gilmore Girls: A Year In The Life? Here's what we know
6 days ago
Netflix shares trailer for fascinating David Attenborough documentary
1 week ago
WATCH: Netflix to release documentary on the Watts family murder
1 week ago
5 Netflix releases to keep an eye out for in October
1 week ago
4 new additions to Netflix to spend your weekend watching
Next Page