Something weird is happening with Taylor Swift's social media

Taylor Swift fans are extremely puzzled by the fact that all traces of social media have been deleted from the singer's official accounts.

At first, there were concerns that this could be a hack but now, it's been suggested that this surprising move could signal the star's comeback.

If you look at her Twitter and Instagram accounts, they have been wiped clean with all photos and posts removed. 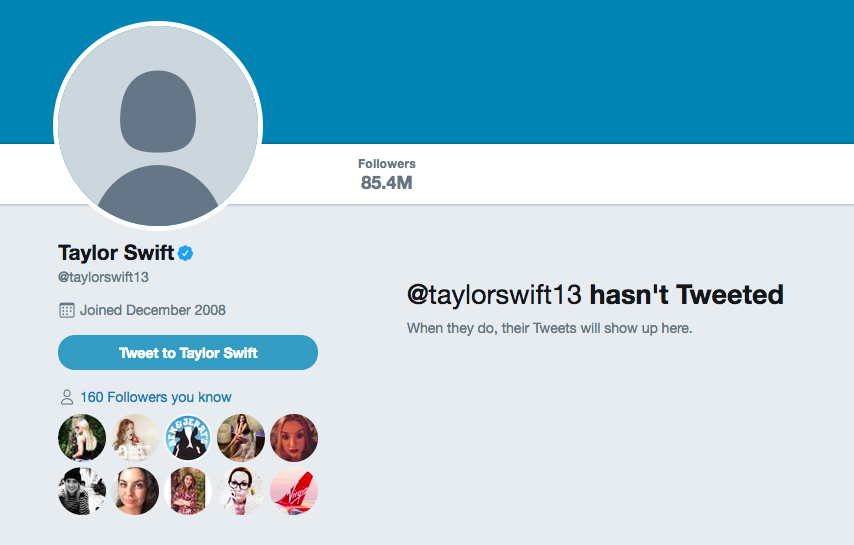 There's no clue as to what's actually going on but Twitter users have started to speculate about the reasons for this social media blackout.

I am very ready for some new @taylorswift13, this social media blackout is very exciting ??????

Social media getting curious about Taylor Swift's blacked out accounts?

I'm awake since last night and it's 3:20 pm here and I still haven't had any sleep. PLSSS @taylorswift13, PLS DROP SOMETHING. ?#TS6IsComing pic.twitter.com/yd2iaKKZvw

It's been a huge week for the 27-year-old who won her civil court case against DJ David Mueller on Monday.

Taylor had said Mueller groped her at a 2013 concert which he denied but the eight-person jury found him unanimously guilty.

popular
Meabh Feerick passes away after sharing that she felt "let down" by Irish healthcare system
Stacey Solomon mortified after walking around shop in see through leggings
Vicky Pattison thanks fans for support after doctors find ovarian cyst
Liveline listeners call for RTÉ's new property show to be scrapped
Father and daughter stabbed to death in London
Here Are The Top 20 Most Common Pin Codes in The World
82-year-old woman reunited with 35-year-old husband after 9 month Covid separation
You may also like
4 weeks ago
Woman recalls giving birth to surprise baby after cryptic pregnancy
1 month ago
Teen girls are developing tics and doctors say it could be from TikTok
1 month ago
9 of the best memes from when Instagram and WhatsApp were down
1 month ago
Facebook, Instagram and WhatsApp down as outage hits for hours
2 months ago
TikTokers flood Texas abortion whistleblower site with Shrek memes and porn
5 months ago
TikTok star sentenced to 10 years in prison over "human trafficking"
Next Page