The 30-year-old shared an adorable photo of the two of them sitting in front of a fireplace, with Wood leaning over to kiss her on the cheek.

It also shows off her stunning engagement ring, which was designed by Jennifer Meyer.

She captioned the photo: "Yes, yes, yes - it will always be yes."

The former Vampire Diaries star shared the same image on his own Instagram account, simply captioning it "the happiest."

He followed that up with a throwback shot of the two of them dressed to the nines, grinning as they stood against a backdrop of fall leaves.

"Not from our wedding BUT IT WILL BE SOON." 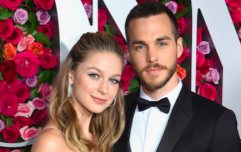 END_OF_DOCUMENT_TOKEN_TO_BE_REPLACED

The couple first met on the set of the CW's Supergirl, where Benoist has played Kara Zor‑El (aka: the title character) since 2015.

Wood joined the series as Mon-El, her on-screen love interest , in 2016.

According to E! News, the pari first sparked rumours of a romance when they were spotted on holiday in Cancun in March 2017.

Benoist was previously married to her Glee co-star, Blake Jenner. The pair wed in 2013, before the actress filed for divorce in late 2016, citing irreconcilable differences.

Their divorce was finalised in December 2017.

popular
Better mark the calendars, RTÉ One's Bump is the comedy you won't want to miss
QUIZ: Can you guess the TV series from the intro lyrics?
Katie Price's son Harvey taken to intensive care at risk of organ failure
Body found in search for missing Glee star, Naya Rivera
Gua Sha: Is it anything more than dragging a stone across your face?
Tesco launch nationwide food appeal for those struggling due to Covid-19
Will Smith admits to 'failing miserably' in 21-year marriage to Jada Pinkett Smith
You may also like
5 months ago
Chris Wood on how Kai Parker has changed since The Vampire Diaries
10 months ago
Supergirl's Melissa Benoist and Chris Wood have gotten married
1 month ago
Debby Ryan got married and her dress was absolutely stunning
1 month ago
Jedward are self-isolating in LA with Tara Reid, and other things you definitely need to know today
1 month ago
Phantom of the Opera director Andrew Lloyd Webber invited Paul Mescal to a singalong and we need it now
1 month ago
Robert Pattinson's photos that he took of himself for GQ Magazine are everything we needed right now
Next Page