He said it was a mistake.

While it's been a whopper couple of months for Lady Gaga professionally, it's sure to have been a tough time for the star in her personal life.

The singer took home her first Oscar at Sunday's Academy Awards, less than a week after she and her fiancé Christian Carino announced they were going their separate ways.

A comment left on a photo of Taylor's this week read "stoked you got away from Gaga #Hollyweird".

Taylor gave the message a cheeky like, pretty much endorsing it for the world to see. 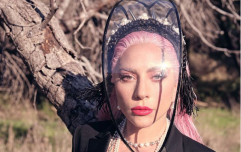 END_OF_DOCUMENT_TOKEN_TO_BE_REPLACED

However, according to E! News he has apologised for it, saying: "Sorry for 'like.' It was an accident," he said on Instagram.

"I'm only proud and happy for Stef."

Taylor and Lady Gaga were together for five years, having met on the set of her video for You And I.

popular
It turns out we may have been brushing our hair wrong the whole time
Three children and two staff test positive for COVID-19 at Meath creche
90-year-old grandfather comes out as gay in viral post and inspires millions!
'Selling Sunset' Season 4: Here's everything we know about the hit show
13-year-old boy drowns in tragic accident at Dublin reservoir
Non-surgical face lifts: What are they, how do they work, and are they right for me?
Love, Guaranteed is the romantic comedy we never knew we needed
You may also like
5 months ago
Lady Gaga has announced The Chromatica Ball tour
5 months ago
Lady Gaga just proposed to herself for Valentine's Day and yeah, same
7 months ago
Lady Gaga only delighted to have 'fooled everyone' into thinking she and Bradley Cooper were in love
9 months ago
Lady Gaga admits she wanted people to believe she was in love with Bradley Cooper IRL
9 months ago
'Everything's fine' - Lady Gaga went flying after a fan pulled her off the stage last night
11 months ago
Lady Gaga donates to fund classrooms following US mass shootings
Next Page