Tess Daly 'devastated' after running over and killing family dog

"It's a dog owner's worst nightmare."

Tess Daly has spoken of her heartache upon accidentally running over her family pet dog and killing it.

The Strictly Come Dancing presenter said that she ran over the Maltese Shih Tzu when she was returning home after builders had left the door open.

The dog, named Minnie, eventually succumbed to her injuries.

Tess told The Sun on Sunday that she was "devastated" by the "terrible accident."

"It has had a huge effect on the whole family and we are heartbroken at losing Minnie. This has, and continues to be, a very emotional time for us all.” 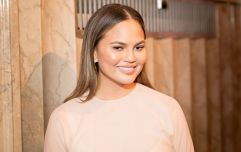 Chrissy Teigen mourns dog Pippa who "died in my arms"

END_OF_DOCUMENT_TOKEN_TO_BE_REPLACED

The tragic and untimely incident occurred as Tess was returning to her home in Buckinghamshire just some days before she, husband Vernon Kay, and their two children were due to head to the Maldives for a family holiday.

They had considered postponing the holiday in the wake of Minnie's passing, but decided to go ahead in the hope that the break would boost morale.

Understandably, the couple's daughters were upset by the news of their dog's death.

Daly and Kay also have a four-year-old Chihuahua named Blue.

He was unharmed in the incident.

popular
Gwen Stefani reportedly pregnant with baby number four
Gaz Beadle reveals his wife Emma McVey is undergoing heart surgery
Adam Collard opens up on dating life since Paige Thorne split
Mum who lost baby after home birth claims maternity hospital failed to share medical details
Why Are Men so Obsessed With Boobs? The Answer is Pretty Surprising...
North West has just landed herself her first Hollywood film
Man claims to have found infant remains near Bessborough site in the 90s
You may also like
5 days ago
Dog leaves owner in fits of laughter after finding a huge sex toy instead of a stick
1 month ago
Netflix fans left on the verge of 'throwing up' and issue warning about 'upsetting' dog movie
2 months ago
The dos and don'ts of keeping your pets safe this Halloween
3 months ago
You can get a bomber jacket for your dog from Aldi
5 months ago
Police footage shows dog being rescued from overheated car
5 months ago
Galway dog charity sees surge in owners surrendering dogs
Next Page