So we all now that the BRIT Awards were held in London last night.

Stars from all over the world walked the red carpet, look glorious. 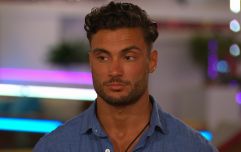 END_OF_DOCUMENT_TOKEN_TO_BE_REPLACED

However, it has been reported that the stars of Love Island were not allowed to walk the red carpet.

According to The Mirror, the decision was made to prioritise musicians and performers over the stars of the reality show.

And to be fair, we kind of get it!

Loved the @brits last night (even if that poor chick is ruining my photo ?) The evening flew by!!!@jessglynne @pink and @george_ezra performances were ?? Congrats to the winners and whoever set those beaut tables ? dreamy ? My best dressed goes to @montanarosebrown1 not because she’s my mate but just because I questioned my sexuality when I saw her butt ? #yougoglenncoco ??? Outfit tagged ??

END_OF_DOCUMENT_TOKEN_TO_BE_REPLACED

23-year-old Montana Brown, who starred in the 2017 season of Love Island, was the exception.

Probably because she was on presenting duties on the red carpet. Makes sense.

And while it wasn't for everyone, she really pulled it off.

There were a number of Love Island alumni at the event, but they were not permitted to walk the red carpet.

what a night.... best dressed? Worst dressed? A lot of speculation but all I know is I had a bloody fantastic evening, I felt fabulous and it was such a pleasure to see some music legends perform and congratulations to all the winners. You all smashed it ?? maybe I’ll wear something less see through next time... or maybe I won’t ?

END_OF_DOCUMENT_TOKEN_TO_BE_REPLACED

Wes Nelson , Laura Anderson and Kaz Crossley all attended the event, uploading a number of pictures and videos on social media.

Megan Barton Hanson and Sam Bird were spotted at Sony's Brit Awards party at the The Shard in central London.

INTERESTINGLY, Sam was spotted leaving the party in the early hours of the morning in the same taxi as Georgia Toffolo.

popular
Couple, both 100, die holding hands just hours apart after being married for almost 80 years
Vogue Williams deems David Beckham a "sh*tebag" over World Cup deal
Here's an early look at the huge range of arts & crafts toys coming to Lidl this month
He may be a politician, but Leo Varadkar's personal life is none of our business
Tom Parker's wife suffers more heartbreak just nine months after husband's death
Here are our top picks from this week's Lidl Toy Event
Kourtney Kardashian gives huge update about stopping her IVF journey 10 months on
You may also like
4 days ago
Love Island 2023 return finally unveiled - and it's just weeks away
2 weeks ago
Love Island's Chloe and Millie have moved in together after splitting from Toby and Liam
2 weeks ago
Love Island stars rush to support Luca Bish after his split from Gemma Owen
3 weeks ago
Luca Bish addresses Gemma Owen breakup
1 month ago
Dami Hope and Indiyah Polack set to move in together
1 month ago
Adam Collard addresses *that* viral video again
Next Page