There's one photo from the Golden Globes that has everyone talking

You could cut this tension with a knife.

Besides Oprah's incredible speech and Saoirse Ronan bagging Best Actress, the moment that seriously caught our attention at the Golden Globes was an awkward one.

On Sunday night, Jennifer Aniston took to the stage in what has been dubbed "a tense moment" as she presented an award. The tense part came due to Brad Pitt's love rival Angelina Jolie's seating position as she is RIGHT in front of the stage.

As Jennifer speaks out to the crowd - she catches Angelina's eye and the star quickly looks down at her seat ignoring Jennifer's speech in a very strange encounter. 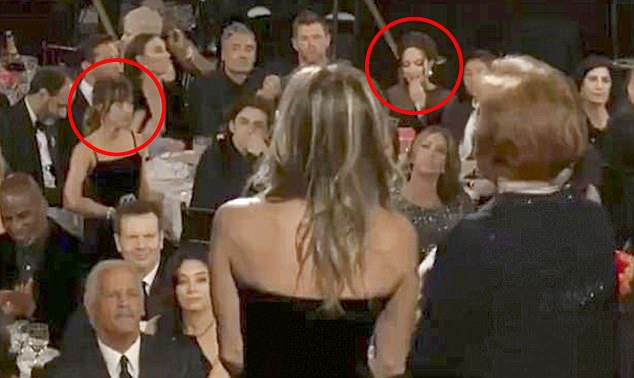 END_OF_DOCUMENT_TOKEN_TO_BE_REPLACED

What makes the whole thing kinda funny and very relatable is the fact Dakota Johnson caught the cold moment unfolding and she can be seen throwing an awkward side eye to Angelia across the table. Yikes.

A classic moment between the girls that we can all relate to. Just goes to show it happens in Hollywood too.

Many took to Twitter to chat about the moment as it is the first time the two women have appeared in the same room since the Critics’ Choice Awards in 2015.

This picture of Dakota Johnson sneaking a glance at Angelina Jolie while Jennifer Aniston presents needs to be put in the Met. pic.twitter.com/e9wnSb5H8S

Jennifer Aniston and Angelina Jolie are both at the golden globes without Brad Pitt, and they are thriving. Proof that you can get over anyone, even Brad Pitt