Was it not mad awkward with all those cameras?

During their time in the Love Island villa, Luca and Gemma's hesitancy to put a label on their relationship became a point of contention, and this continued once the show ended last month.

In his Instagram stories, Luca joked about being on a mission to make Gemma his girlfriend, while when asked about how she felt, Gemma said she doesn't want anything grand, just a nice gesture to mark it.

END_OF_DOCUMENT_TOKEN_TO_BE_REPLACED

Their reluctancy made us believe that perhaps they were going to be lowkey about the whole thing. Maybe a grid post here, a tweet there. Imagine our surprise then, when Luca took to Instagram to share what can only be described as a short film documenting his quest to make Gemma his girlfriend, officially.

Maybe it's not fair to parse through an important milestone in this couple's relationship as though it were some televised event. However, Luca made a conscious decision to capture the moment and share it with their combined audience of over 3 million Instagram followers, so perhaps some gentle commentary is only to be expected.

So, with that being said, here are five thoughts I had while watching Luca's girlfriend proposal.

1. What was the budget on this thing?

Between the string quartet, hundreds of red roses, Cartier goodies and an entire filming crew, this must have set Luca back an absolute fortune. How the other half live, eh?

2. Would it not be mad awkward with all those cameras?

END_OF_DOCUMENT_TOKEN_TO_BE_REPLACED

The video manages to pick up on Gemma and Luca from multiple angles, and while they do look quite adorable and happy, one can't help but wonder how awkward they must feel as well? Also, did they do multiple shots? How long did this whole thing take?

3. They missed a trick by not making this Cartier spon-con 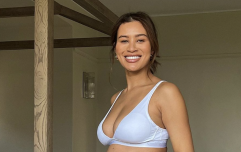 Montana Brown hints at when her baby's due date is

END_OF_DOCUMENT_TOKEN_TO_BE_REPLACED

As some sort of proposal video, yes, it's a little bit cringe. But, if it had been framed instead as a commercial for designer jewellery? Babe, that'd be gorge. In for a penny, and all that. It would also work as an ad for roses. Or pools. Or balloons.

4. How'd they get all the balloons to stay in place?

When the video ends, a drone shot pans over the pool, with several balloons spelling out the phrase 'Be My Girlfriend'. But how did they lay them out so perfectly in the first instance? And how did they stay in place?

5. It'd make you miss 'making it official' in the villa, all the same

Listen, it's wonderful that Luca is able to splash out on a romantic gesture, but there is something to be said for when the islanders are left to their own devices in the Love Island villa. There's an innocence in setting up an elaborate scavenger hunt around the house, or spelling out a message with lipstick or chocolate sauce on your lover's tissue or dessert plate, respectively.