Turns out Beyoncé was absolutely bricking it about meeting Meghan Markle

Would we be right in saying that you'd never think Beyoncé would be afraid of anything?

Her whole brand is fierceness, fearlessness and aloofness, to the point where she'd be very intimidating in real life.

But even though she's pop royalty herself, she was apparently super nervous when meeting Meghan Markle.

END_OF_DOCUMENT_TOKEN_TO_BE_REPLACED

Bey and the Duchess came face-to-face at the premiere of The Lion King in London this week and according to her co-star Billy Eichner, Bey was bricking it.

"We were all kind of nervous, even Beyoncé," he told Jimmy Kimmel on his show.

Billy also revealed that the cast had been given super strict rules to follow ahead of meeting Meghan and Prince Harry. 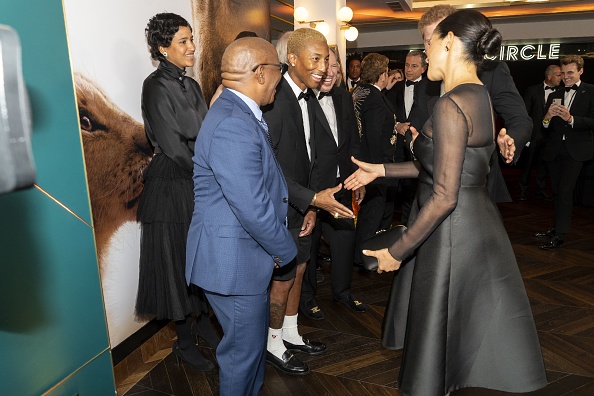 "In the days leading up to it, they email you a protocol of how you're supposed to greet Prince Harry and Meghan. They are very intense about it. I'm not kidding! You're supposed to say, 'Your royal highness.' You can't speak until your hands are, like, in a handshake with his.

"My plus-one—my guest I brought with me, my very good friend Jared—they said he had to stand behind me and not speak unless he was spoken to. I'm not kidding! I was like, 'Does that same rule apply to Jay-Z?' I have a feeling it doesn't."

Their actual meeting wasn't at all as intense they'd expected it to be though.

Billy said that the royal couple were "very, very nice and totally chill and down to earth and lovely."

popular
Traditional names such as Mary, Maureen, John and Michael may soon be extinct
Toddler drowns in swimming pool while on holidays in Costa Blanca
The 2 Johnnies share unbelievable catfish ordeal as woman 'targets 40 people'
This is how much Kourtney and Travis' wedding cost
Singer Cliona Hagan marries Simon Sheerin in Athlone ceremony
Kevin Spacey charged with four counts of sexual assault against three men
Vogue Williams opens up about being cheated on by "asshole" boyfriend
You may also like
3 months ago
Turns out, the Duchess of Cornwall had a rather harsh nickname for Meghan
3 months ago
Prince Harry reveals he "does not feel safe" coming back to the UK
3 months ago
Prince Harry and Meghan Markle concerned over Spotify misinformation
4 months ago
Cardi B wants to have "a chat" with Meghan Markle after defamation lawsuit
5 months ago
Prince Harry and Meghan Markle share first photo of daughter Lilibet
5 months ago
Meghan Markle may have to testify in Prince Andrew sex case
Next Page