US film director Peter Bogdanovich has passed away aged 82.

Best known for his 1970s black and white films such as The Last Picture Show and Paper Moon, Bogdanovich was considered to be part of a generation of young “New Hollywood” directors.

END_OF_DOCUMENT_TOKEN_TO_BE_REPLACED

Dying early on Thursday morning at his home in Los Angeles, his daughter, Antonia Bogdanovich, said he died of natural causes.

Deemed an auteur from the beginning of his career, the director earned himself eight Oscar nominations over the span of his career.

Following on from 1971's hit The Last Picture Show, he directed the comedy What’s Up, Doc? which starred Barbra Streisand and Ryan O’Neal, before going on to direct Paper Moon, which won 10-year-old Tatum O’Neal an Oscar.

Bogdanovich began his career as a film journalist and critic before venturing into directing, but also worked as a film programmer at the Museum of Modern Art in New York, his hometown. 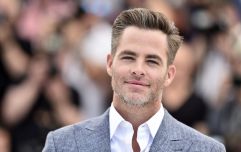 Don't panic but Chris Pine has been spotted in Ireland

END_OF_DOCUMENT_TOKEN_TO_BE_REPLACED

The director was not only in the spotlight for his film career but also his personal life after his well-known affair with Cybill Shepherd began during the filming of The Last Picture Show while he was married to Polly Platt.

He then endured heartbreak when his girlfriend and Playboy model Dorothy Stratten was murdered in 1980, then going on to marry her younger sister Louise.

popular
Traditional names such as Mary, Maureen, John and Michael may soon be extinct
The 2 Johnnies share unbelievable catfish ordeal as woman 'targets 40 people'
Toddler drowns in swimming pool while on holidays in Costa Blanca
This is how much Kourtney and Travis' wedding cost
Kardashian fans in hysterics after Kim's vegan advert
Kevin Spacey charged with four counts of sexual assault against three men
Daughter of teacher killed in Texas school shooting pays tribute
You may also like
2 weeks ago
Everything we know about the Fatal Attraction reboot
3 weeks ago
Johnny Depp to return to big screen for first time in three years for new film
3 weeks ago
A Hunger Games prequel is coming to cinemas next year
1 month ago
Everything we know about a possible Derry Girls movie
2 months ago
WATCH: The trailer for Where the Crawdads Sing is here
2 months ago
People are discovering Ukrainian President Zelensky voiced Paddington Bear
Next Page