The twins come just a year after the birth of their big sister.

The eight-time Olympic champion and partner Kasi Bennett recently became a family of five and welcomed the new babies with Instagram posts.

Thunder's name is similar in wordplay to that of his big sister, who Usain and Kasi named Olympia Lightning Bolt following her birth last year.

Saint Leo is named after the retired sprinter's middle name.

"You are the rock of this family and the greatest daddy to our little ones," she wrote. "We love you world without end!" 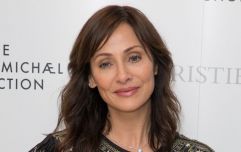 Natalie Imbruglia has welcomed her first child, and his name is just adorable

END_OF_DOCUMENT_TOKEN_TO_BE_REPLACED

The wordplay of both Thunder and Olympia Lightning is reminiscent of the likes of North West, the seven-year-old daughter of Kim Kardashian and Kanye West.

"I actually got it from Jay Leno, who made that as a joke," Kim previously said of the punny name in a video for sister Kylie Jenner's YouTube channel.

popular
You can now get paid to watch every episode of Grey's Anatomy
POLL: Vote now to see which side you're on in this Irish head-to-head battle
Love Island fans spot Millie and Liam doing same weird gesture in bed
Joanna Cooper's first intimates brand has just dropped
18-year-old TikTok star Timbo the Redneck dies after stunt goes wrong
Love Island: Kaz's family issue statement after "vulgar racist abuse"
Love Island: You need to see Millie's dad's Instagram
You may also like
1 year ago
2019 is coming to an end and here are the 10 best celebrity baby names this year
1 year ago
Cecelia Ahern has welcomed a baby girl, and her name is very unusual
2 years ago
Abbey Clancy has revealed her newborn son's name, and it's just perfect
4 years ago
This celebrity baby name is OFFICIALLY the weirdest one yet
5 years ago
Actress Jena Malone Unveils Unusual Name For Her Baby Boy
5 years ago
People On Twitter Have Confused Louis Tomlinson's Reported Baby's Name As A Weather Warning
Next Page