The cervical cancer campaigner is set to undergo radiotherapy.

Cervical cancer campaigner Vicky Phelan has said she will not be able to join Charlie Bird as he climbs Croagh Patrick as part of his Climb with Charlie campaign. 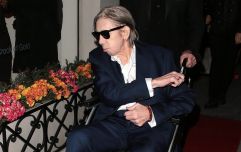 END_OF_DOCUMENT_TOKEN_TO_BE_REPLACED

While Vicky had hoped to join Charlie on the climb, she revealed in a video update to her followers that she is "not in any shape or form to be able to climb anything",

Speaking after she was presented with the Freedom of Limerick earlier in the week, the cervical cancer campaigner said she has been suffering "a lot of pain" in her back that she hopes will be relieved soon.

"Basically, I had a CT scan last Tuesday and what that showed was thankfully, no new tumours which is absolutely brilliant in my situation," she told her followers.

"I think I was expecting it to be far worse.

END_OF_DOCUMENT_TOKEN_TO_BE_REPLACED

"But what it has shown is that two of my existing tumours have grown and one of them, in particular, is growing and is actually starting to grow into my spine, into my L2 vertebrae.

"It's going into the bone and that's what's causing a huge amount of pain for me at the moment.

"It's only starting to grow into the bone and they can do something for it."

Vicky says she met with her radiation oncologist on Friday morning (4 February) and is planning to have radiotherapy over a two week period.

END_OF_DOCUMENT_TOKEN_TO_BE_REPLACED

She is hoping it will begin within the next two weeks.

"I'm going to be quite ill with it because she's trying to target two areas because there's another area up near my liver where the other tumour is growing and that's causing me some problems as well," Vicky explained.

"The only difficulty with targeting both of the areas rather than one is that I would be very sick because the second area is quite near to my liver."

Vicky said she did not have to make a decision about the procedure yet.

However, she stated that, after her speaking with her family, she believes she is willing to "take the risk of being sick for a short term period for a long term gain".

"If it can relieve all of the pain that I'm in and give me back my mobility and a bit more quality of life, it's worth it in the long run," she added, before mentioning the Climb with Charlie campaign.

"Obviously, I will not be climbing Croagh Patrick. Be under no illusions, I'm not in any shape or form to be able to climb anything, particularly with tumours on my spine."

Vicky did, however, reveal that she is looking forward to celebrating her son's birthday and supporting Charlie's campaign in the coming weeks.

Meanwhle, with Covid-19 and ongoing environmental works on Croagh Patrick, the Climb with Charlie campaign has said it cannot facilitate large numbers of people on the mountain on 2 April.

However, the veteran broadcaster is encouraging everyone to log on to the event's website and donate what they can or set up their own fundraisers to climb in their local area.

He said the latter could be whatever people are able to do, including climbing a set of stairs or a short walk around the house, a local park or to the beach.

People can donate to the campaign or find out more on the Climb with Charlie website here, with all funds raised to go to charity.