Sinéad has made massive strides when it comes to advocating for inclusivity in fashion, and made major turns in the industry throughout the past two years.

From walking on the Met Gala carpet to being a contributing editor of Vogue, Sinéad has made her mark all over the world. 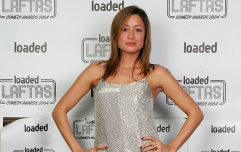 END_OF_DOCUMENT_TOKEN_TO_BE_REPLACED

We've always been a big fan of Sinéad, and now a former Spice Girl is gushing over her too.

Victoria Beckham met Sinéad this week and shared an Instagram post about her this morning. In the first picture, the pair are both smiling, while in the second they're doing the ultimate girl power pose.

"I have wanted to meet @thesineadburke for so long! We talked for hours - she is incredibly smart and funny - and her advocacy work is inspiring. We all have a lot to learn and it was a privilege for me to have had time together with her yesterday. x VB."

The fashion campaigner has been making waves in Ireland and around the globe by using her voice to spread important messages on TED talks and at the World Economic Forum in Davos, where she chatted to the likes of RuPaul, Joe Biden and Oprah Winfrey; one on one.

Girls With Goals || Her · Ep.155: 'Bits of Me' - Linnea Dunne on the importance of women's health
popular
Scarlett Moffatt discovers ‘30% rain’ on weather app doesn’t mean chance of rain
Princess Anne: Harry and Meghan were right to quit royal duties
Lady Gaga's dog walker shot as her two dogs are stolen
Chloe Ferry and Wayne Lineker announce "engagement"
Baileys chocolate cupcakes are coming just in time for Mother's Day - and any day, really
Met Éireann predicts dry, bright, and sunny weekend
Anne Hegarty shook by "worst ever" final Chase
You may also like
4 months ago
Victoria Beckham is releasing a line of Spice Girls-inspired lipsticks
1 year ago
Victoria Beckham shares how she makes her marriage work with David
1 year ago
Victoria Beckham praises Meghan Markle's speech at the Fashion Awards
1 year ago
Victoria Beckham on why she didn't take part in the Spice Girls reunion tour
1 year ago
20 years on: David and Victoria Beckham share ultimate throwback to mark their anniversary
1 year ago
Harper Beckham rated as more 'socially powerful' than Meghan and Harry
Next Page