After rumoured infidelity last month, we thought we were about to see the end of David and Victoria Beckham however, their PR agent called the rumours "laughable" and it looks like that is exactly what they were as David and Queen V have never seemed more content and in love.

Marking their 19th wedding anniversary together (yep, where does time go?) Both of them took to social media to share the same image of them enjoying dinner to celebrate the occasion.

"19 Years WOW ... This time 19 years ago I was dressed from head to toe in purple ... Happy anniversary to the most amazing wife & mummy ... Love You x @brooklynbeckham@romeobeckham @cruzbeckham#HarperSeven"

Sharing the same image, Victoria too took to social media captioning it: 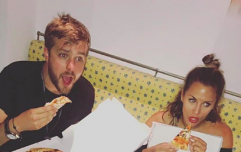 END_OF_DOCUMENT_TOKEN_TO_BE_REPLACED

But the 19-year-relationship hasn't been an easy ride for the couple who too have had their fair share of scandal and drama - from David's alleged cheating with Rebecca Loos to constant upheaval and relocating to then, last month's scandal which thankfully was quashed before it grew legs, it seems like it's all in a days work for the Beckhams but, through it all they have remained by each other's side and that is why we love them!

Here's to another 19 years of Posh and Becks.

popular
4 new additions to Netflix to spend your weekend watching
Selling Sunset's Chrishell Stause reveals "the brokerage has split"
The sentimental engagement ring trend you're going to see a lot of for the rest of this year
Lidl is stocking dog Halloween costumes next week and sorry now, how adorable?
QUIZ: How well do you remember Hocus Pocus?
Why Are Men so Obsessed With Boobs? The Answer is Pretty Surprising...
The Pursuit Of Love is period drama that will be your next TV obsession
You may also like
4 months ago
Dogs Working From Home is the Instagram account that you need to follow during lockdown
4 months ago
'I'm not posting continuous pictures of my face' Niamh Webb O'Rourke on the evolution of blogging
5 months ago
Living with synesthesia: The Irish artist who experiences colour in an entirely different way
5 months ago
Check out the €20 New Look bargain that's just too good to miss out on
5 months ago
'Lift our spirits': The Irish artist creating custom illustrations during the #Covid-19 pandemic
5 months ago
Chowder 'the bear dog' is the adorable ball of fluff your Friday needs
Next Page