What a year it has been for Vogue.

In the space of the past month alone, the mother-of-one has celebrated her son's first birthday, wrapped the second series of her TV show on Channel 4, celebrated her wedding with a lavish party and landed a gig as the brand ambassador of Diet Coke.

So, it's no wonder that Vogue has described this chapter in her life as "full on" as she spends her time either working or with Theodore noting that she hasn't had a day where she's not doing either.

"It's a very full life at the moment so, I suppose something has to give and right now it's our social life as we're concentrating on work and Theodore" the 38-year-old revealed.

Continuing, Vogue explained that although life has changed since having her first child, it's not all different.

"Having a baby, they do fit into your life, some things change but not all."

And speaking of kids, as Theodore begins to walk and sleep "like a dream", Vogue is enjoying this period explaining that she's in no rush to bring a sibling into the world for him.

"Not anytime soon, I'm definitely not pregnant. I don't want them to be too far apart in age but not right now."

But, one thing on Vogue's current agenda is finding a house in Ireland. The star who admitted she wouldn't move back to Ireland due to work commitments in the UK would still like a place here for Easter holidays and Christmas break.

"Howth is small so it's taking some time but, I know what I want so I'll keep looking until I find it."

The TV star currently has an apartment in Howth which she occasionally visits alongside her husband, Spencer Matthews and their son but, Vogue is looking for somewhere bigger where they can stay for three or four weeks at a time. 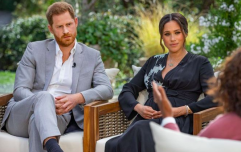 END_OF_DOCUMENT_TOKEN_TO_BE_REPLACED

While she's looking for a Dublin home she's still spending most of her time in London having just wrapped the second series of "Spencer, Vogue and Baby too", this time titled "Spencer, Vogue and Wedding two" as the series focuses on their wedding party, Theodore's birthday and according to Vogue, features "a lot of Irish references" and a gas moment between herself, her mom and her aunt.

And when she's not filming she's working as a brand ambassador for Diet Coke. Having just been announced as the latest face for their new #YouDoYou campaign, Vogue explains that Diet Coke is the perfect fit for her as she drinks it almost everyday.

Thankfully, it won't be long more until you'll catch Vogue on TV as "Spencer, Vogue and Wedding two" will air next month.

Girls With Goals || Her · Ep.156: 'Beauty Returns' - Rebecca O'Keeffe is BACK and we're talking about viral beauty trends
popular
A royal insider has revealed the truth behind Meghan and Kate's rumoured feud
Palace source says THIS incident on the tour of Australia upset Meghan's staff
The Queen has banned Meghan Markle from wearing any of Princess Diana's jewellery
Meghan Markle's old CV has emerged - and it seems she lies like the rest of us!
Kate Middleton has addressed the rumours that she's pregnant with her fourth child
A letter to my daughter on International Women's Day
The promise William made to Kate the day they got married will make you CRY
You may also like
3 days ago
Sofía Vergara's ex can't use embryos without her consent, says court
4 days ago
"I had to put on a brave face while hurting so much inside" Paris Hilton speaks out on uncomfortable interview from 2011
5 days ago
Yes, Meghan is wearing Princess Diana's bracelet during the Oprah interview
1 week ago
Jamie Spears' lawyer says #FreeBritney supporters are "so wrong"
1 week ago
Jesy Nelson "mentally bullied" herself during Little Mix years
1 week ago
Kate Winslet experienced "horrible" body shaming after Titanic
Next Page