“Nepotism is a thing and I’m very aware of it.”

You will most probably know by now that Elizabeth Olsen is indeed a relation of the Olsen twins, in fact she's their sister. When she first started off in the acting world we weren't entirely sure if she was part of the Olsen dynasty but since those early days it's been confirmed.

This lady is a star in her own right, Olsen or not she's a very talented actress. She currently stars in the hit series WandaVision on Disney+ and has been continuously praised for her lead role as Wanda in the Marvel show. 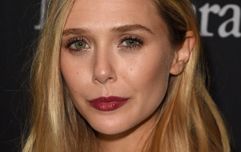 END_OF_DOCUMENT_TOKEN_TO_BE_REPLACED

Now the 32 year old has opened up about being an Olsen in the acting industry and carving her own career. The star also talks about Instagram and why she deleted her account.

She tells Grazia USA, “Nepotism is a thing and I’m very aware of it.” Elizabeth has always tried to make her own name aside form her last and she's been able to do that and show off her own talents without the Olsen name playing any part, "I’ve always wanted to do it alone,” she says.

The Marvel actress also spoke about being on Instagram briefly to share her work and "talk about charities" but she says "I think at the end of the day, what I discovered was one, I’m really bad at creating a perceived identity!”

“I didn’t find it very organic to who I am as a person,” she continues. “I found some joy in putting up silly videos, but I think the main reason I stopped – not I think, I know the main reason why I stopped – was because of the organization in my brain.”

She goes on to explain she found she was overthinking about posting she tells the magazine "I love processing information. I love reading articles. I love listening to podcasts. I love communicating about things that are happening in the world to people around me. And what I don’t love is that my brain organization was saying, ‘Should I post about this?’ That seemed very unhealthy ….”

The actress ended up deleting her account, she said "there was a lot of it that was just bothering me for my own sake of what value systems I have.”

Elizabeth currently stars in Marvel's WandaVision which has been a hit with audiences.

Girls With Goals || Her · Ep.155: 'Bits of Me' - Linnea Dunne on the importance of women's health
popular
Scarlett Moffatt discovers ‘30% rain’ on weather app doesn’t mean chance of rain
Princess Anne: Harry and Meghan were right to quit royal duties
Baileys chocolate cupcakes are coming just in time for Mother's Day - and any day, really
Jesy Nelson "mentally bullied" herself during Little Mix years
Lady Gaga's dog walker shot as her two dogs are stolen
Anne Hegarty shook by "worst ever" final Chase
Chloe Ferry and Wayne Lineker announce "engagement"
You may also like
1 month ago
A mysterious new trailer has landed for your first must-watch show of 2021
1 month ago
5 reasons why this new Disney+ show is not just for superhero fans
5 years ago
Elizabeth Olsen and Tom Hiddleston Are “Hooking Up”
1 week ago
Demi Lovato had three strokes and a heart attack following 2018 overdose
1 week ago
Prince Philip admitted to hospital after "feeling unwell"
1 week ago
Kourtney Kardashian and Travis Barker go Instagram official with sweet post
Next Page