Another twist in this story.

So earlier this week, we revealed that Wes Nelson had sent Megan Barton Hanson a pretty emotional birthday card.

In the card, Wes poured his heart to his ex girlfriend, and also bought her a trip to Morocco.

This news came after it was announced that the couple had split.

Anyway, it has been a series of "are they back on?" ever since.

But now it seems as though Wes Nelson has actually moved on, and is secretly dating insta-model Lissy Roddy.

Watching @champagnepapi last night ?Feels so weird not training everyday? One thing I won’t miss is the early morning starts ? Thank you @boohoomanofficial for sorting a box it was definitely one to remember ??

END_OF_DOCUMENT_TOKEN_TO_BE_REPLACED

And guess where they met lads? Sure wasn't it only lovely Dublin!

According to a source, the pair met at a party thrown by Nasty Gal, which took place in the city a few weeks back.

"He's been seeing Lissy for a few weeks now. Although it's early days - they've been inseparable." 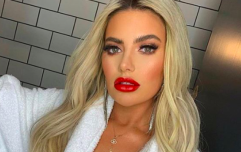 END_OF_DOCUMENT_TOKEN_TO_BE_REPLACED

"Wes is having a really good time getting to know Lissy, they've been on some nice dates and they've been hanging out, going on shopping trips together and chilling at home."

"Lissy's the reason Wes was so adamant he wouldn't be getting back with Megan. She is absolutely stunning and he's one very happy man."

We're not so sure, given the whole birthday card thing!