George Clooney's mum has revealed the sex of his twin babies

She is clearly an excited grandmother-in-the-making, and now it looks like George Clooney's mother Nina has made an exciting reveal about what it is her son and daughter-in-law will be welcoming in a few months time.

According to RadarOnline, Mrs Clooney has let slip that the 55-year-old actor's wife Amal, 39, is expecting a boy and a girl. "It will be one of each," Nina said. "Yes, a boy and a girl. That’s what I’ve been told. How marvelous! My husband and I are extremely excited."

Nina previously said her son will make a 'great' dad with his wife of two years. 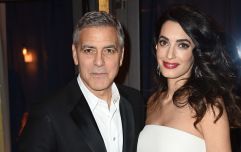 END_OF_DOCUMENT_TOKEN_TO_BE_REPLACED

"We are extremely happy for George and Amal, and I cannot imagine two people who would be better parents," the actor's mom gushed to UsWeekly on Friday of the soon-to-be parents.

"I think he'll be great, and I think she'll be a great mom!" Nina boasted.

It is only a couple of days ago since the rumours about the pregnancy was finally confirmed, although speculations have been rife for weeks after sources close to Amal had let it slip that the human rights lawyer was expecting.

Another source confirmed to InTouch that Amal, who is of Lebanese-British descent, 'is pregnant with twins: a boy and a girl.'

The couple 'feel like they’ve hit the family jackpot' in light of the big news, the source told the magazine.

"When George and Amal found out it was twins they were surprised," the source said, "but also a little scared because they both had said that one was enough. But the news that it was a boy and a girl made them both really happy... they can’t believe in just a few months, they’re going to have two babies."

Girls With Goals || Her · Ep.156: 'Beauty Returns' - Rebecca O'Keeffe is BACK and we're talking about viral beauty trends
popular
RTÉ wins rights to Harry and Meghan's Oprah interview
Pregnant women advised after four preliminary stillbirths linked to Covid in Ireland
Palace source says THIS incident on the tour of Australia upset Meghan's staff
Rare "Sahara dust" weather event expected to hit Ireland this week
Kate Middleton has addressed the rumours that she's pregnant with her fourth child
"He told me I had cervical cancer, but then he said - you will be okay"
Aisling Bea is reportedly dating a leading Hollywood man
You may also like
2 years ago
George Clooney says Meghan Markle is being 'pursued and vilified' like Princess Diana
2 years ago
Meghan and Harry's new baby will reportedly have very famous godparents
2 years ago
The glamour! Harry and Meghan holiday with the Clooneys in Lake Como
2 years ago
George Clooney is being treated following motorcycle crash
3 years ago
George Clooney has admitted why he hasn't been acting as much
3 years ago
George Clooney on why he and Amal named their twins Alexander and Ella
Next Page