"Do you know what that does to a young girl?"

Zara McDermott has opened up about her experience with image based sexual abuse when she was in school and how she felt she was "blamed" for the incident.

END_OF_DOCUMENT_TOKEN_TO_BE_REPLACED

Zara told The Times she contemplated suicide after the incident. "People don't realise when something like this happens, it affects the whole family," she said.

"My teachers just washed their hands of me. Drilling it into me, constantly blaming me. Do you know what that does to a young girl?"

Zara attended Coopers' Company and Coborn School in Upminster, east London which has since changed the way they handle image based sexual abuse. They now have "specific policies for peer on peer abuse and clear procedures for sexting incidents."

Zara's experience in school wasn't the only time she had to deal with private images other being leaked online. When she left Love Island in 2018, further intimate images were also released without her consent. 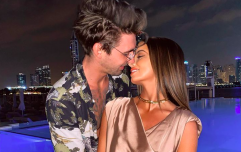 END_OF_DOCUMENT_TOKEN_TO_BE_REPLACED

"Notably, when I came out of Love Island, and came out to images of me, what felt like, circulating around the whole world. It was one of the hardest things I went through in my whole life," she said.

"For those of you who don't know what this is, it's basically when one person shares intimate images of videos of another person without their consent... I am really humbled and honoured to announce that the BBC and I are currently making a documentary to share my story."

"My main aim is to bring awareness to this issue, and be a voice for those who have suffered in silence and to help make a change. I am sharing my story and being my most vulnerable, emotional and raw."

The sharing of intimate images without a person's consent was made illegal in Ireland just this month.

Girls With Goals || Her · Ep.155: 'Bits of Me' - Linnea Dunne on the importance of women's health
popular
Scarlett Moffatt discovers ‘30% rain’ on weather app doesn’t mean chance of rain
Lady Gaga's dog walker shot as her two dogs are stolen
Princess Anne: Harry and Meghan were right to quit royal duties
Met Éireann predicts dry, bright, and sunny weekend
Baileys chocolate cupcakes are coming just in time for Mother's Day - and any day, really
Chloe Ferry and Wayne Lineker announce "engagement"
Anne Hegarty shook by "worst ever" final Chase
You may also like
2 weeks ago
Love Island plans to film in the UK this summer
1 month ago
Love Island's Zara Holland charged in Barbados for breaching Covid-19 rules
1 month ago
"Calling new islanders": Love Island is now casting for next season
3 months ago
Love Island is already looking for contestants for the 2021 series
3 months ago
Love Island's Camilla and Jamie welcome first child together
4 months ago
What is the difference between harmless joking and online abuse?
Next Page