Paul Mescal has said that he is proud of how teenage sex was depicted in Normal People.

Paul, who plays Connell in the hit TV adaptation of Sally Rooney's novel, said everyone who worked on it wanted these scenes to be as accurate as possible.

The show has been widely praised by viewers and critics but was the subject of some controversy on RTE's LiveLine this week. Some callers complained that the sex shown was too explicit.

Speaking on The Late Late Show last night, Paul admitted that he had listened to the debate.

"I suppose I was a bit surprised and the last thing I want to do is sit here and judge people," he told host Ryan Tubridy.

"We worked really hard to make it feel like it was a real accurate and truthful representation of sex amongst young people. 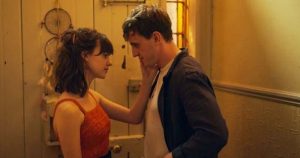 END_OF_DOCUMENT_TOKEN_TO_BE_REPLACED

The series, he added, isn't solely based around sex.

"It's one aspect of the story and what it's really about is these two people coming together and drifting apart."

Continuing, the Maynooth native said he understood what he was in for before they began shooting and that there was lots of care taken to make sure every involved was comfortable.

"I obviously read the book before filming and I think having read the book that it was quite clear to me that there were going to be sex scenes," Paul said.

"I knew very quickly with Daisy that we were very respectful of each other.

"And obviously the important part of the process was that we had an intimacy co-ordinator throughout the filming who oversaw all of that content and was very present in that discussion."

popular
Lauren Goodger assaulted and taken to hospital after baby girl's funeral
Are You The One? UK's Thérèse Mullaghan opens up on the reason she went on the show
Luca and Gemma left the Love Island reunion early after row
Tasha's dad responds to Jacques' Instagram video
Barry Keoghan and girlfriend Alyson welcome their first child together
Everything we know about the Love Island reunion
These baby names are set to be popular in 2030 (so maybe get in there now!)
You may also like
3 weeks ago
WATCH: The trailer for The Handmaid's Tale season 5 is here
1 month ago
Hang on, is Boris Johnson entering the Love Island villa tonight?
1 month ago
NOW announces large price reduction to its monthly membership
1 month ago
Netflix CEO confirms adverts are coming to the service
1 month ago
Netflix looking for participants for Squid Game reality series
1 month ago
Here's why Gemma and Luca have a fight on tonight's Love Island
Next Page