Adele can do no wrong in my eyes, especially when she's singing, talking and also laughing.

Over the weekend, however, she had a few people a little surprised by her American accent which she tested out on US television.

The British singer was the host of Saturday Night Live, and having never hosted the show before she blew the audience away not just with her singing capabilities, but her presenting ones too.

it's the way americans don't realize that Kate was trying to do an exaggerated cockney (ish) accent so Adele responded in an exaggerated valley girl accent for me.

But before the show even went to air on Saturday, the 32-year-old singer was part of a few promos that went out to announce her hosting gig. In one of them, she tried out her best American accent... and people were well and truly confused.

But it wasn't the lighthearted promo announcing Adele as the host that got people talking, but rather her attempt at the US accent... and the fact that she still, after all these years, sounds perfectly British.

Honestly, what can't that woman do?

Can't stop listening to Adele's American accent on repeat. What can't she do?! https://t.co/oDRItJhTYV

I always forget Adele’s actual speaking accent sounds like she’s a character in a Charles Dickens movie. You hear her sing and you think her speaking voice would be sort of posh and it’s not at all and I think that’s kind of wonderful. 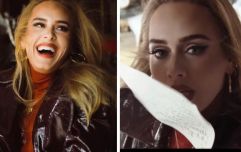 WATCH: Adele's blooper reel from her "Easy on Me" video is pure gold

END_OF_DOCUMENT_TOKEN_TO_BE_REPLACED

During her stint on the show, Adele also addressed her recent weight loss. In a casual, lighthearted bit, she joked:

"I know I look really really different since you last saw me but actually because of all the Covid restrictions and the travel bans, I had to travel light and only bring half of me, and this is the half that I chose!"

Adele also thanked the frontline workers in her monologue, who were in the SNL audience.

popular
14-year-old boy charged with murder of 12-year-old Ava White
8 of the hottest make-up trends to try this festive season
The best memes from this year's Late Late Toy Show
Tributes pour in for designer Virgil Abloh following death at 41
The internet can't deal with Ryan Tubridy's Toy Show opening
Japan to close its borders to tourists to prevent Omicron spread
We finally know what happened to Sam in And Just Like That
You may also like
5 days ago
Mel B's very risky joke has been edited out of An Audience With Adele
1 week ago
Opinion: Adele was 'disappointed' by conversations about her weight - so let's stop having them
2 weeks ago
Adele opens up about missing her son during divorce
2 weeks ago
Adele admits she was "embarrassed" when her divorce news broke
1 month ago
8 things we learned about Adele from her 73 questions with Vogue
1 month ago
Adele said that her anxiety caused her to lose weight
Next Page