If you haven't seen Living With Yourself on Netflix then you need to watch it ASAP.

You will binge watch the season in one sitting (I did) because it's just so good; you won't be able to turn away. There are so many twists and turns throughout the show that it's one of the best we've seen in a while - and a lot has to be said for its main characters Aisling Bea and Paul Rudd. 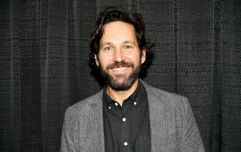 END_OF_DOCUMENT_TOKEN_TO_BE_REPLACED

The pair are excellent together and work so well as the husband and wife duo on the show.

However, in a recent interview with Sunday World Magazine, the Kildare native said that there were a few mishaps while filming - and one very awkward sex scene.

The actress said: "We had a very funny moment when the nipple covers I was wearing slipped off mid-way through a sex scene. I guess they were just a bit sweaty, and I looked down and they were gone.

"The camera didn’t pick up that we needed to stop filming as we were trying to do the scene in one take to ensure it had good continuity, so he was still in character and trying to protect my dignity from four other guys and a fella holding a boom mike, covering my boobs with his arms and elbows.

"It’s great when something like that happens on set because it shows that the person you are working with has your back."

You can watch Living With Yourself on Netflix now.

popular
Terrie McEvoy responds to trolls who commented on her pregnancy weight
Dublin nurse scammed out of all her savings warns others
The 'secret' Zara label signs that'll apparently help you get the right size every time
Police release bodycam footage of missing YouTuber Gabby Petito
Lucy Mecklenburgh shares fear of finding son "blue in his cot"
Derry Girls star speaks out after show called "distinctively British"
The Style Fairy's T-shirt edit is so worthy of your ideal autumn capsule wardrobe
You may also like
1 year ago
WATCH: Paul Rudd tells us all why we should, obviously, wear a mask
1 year ago
Aisling Bea has explained Rebekah Vardy-gate to Paul Rudd and everything is right in the world
2 years ago
Little Ronnie from Role Models is now 22, and looks SO different
2 years ago
Paul Rudd turned 50 this weekend and people are nable for his youthful looks
5 years ago
WATCH - Paul Rudd Recreates His Titanic Audition With James Corden
6 years ago
7 Reasons... That Prove Paul Rudd Is An Absolute Legend
Next Page