It will be called American Horror Stories.

American Horror Story was first introduced to our screens back in 2011 and it was one of the first of its kind when it came to its season-long storytelling arc.

As any of you who watch the show will know, each season has its own separate story. All of the stories are set in different times, different worlds, and feature different people. You can start at any point in the series that you want (well, not midseason, but you know what we mean) and you don't need to remember any details or characters from one season to the next. 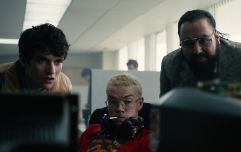 END_OF_DOCUMENT_TOKEN_TO_BE_REPLACED

We loved American Horror Story because it gave us some great stories, some fantastic acting, and some good scares all while staying fresh and new. The other great thing about it is that a lot of the cast stayed the same so we could see some of our favourite actors playing a variety of different roles.

We LOVE this idea. So often, we feel like watching something on TV but we don't want to commit to a full season or watch an entire feature-length film. We love the instant gratification that comes with a one-episode story arc.

Some excellent shows have followed this style, such as Black Mirror, which has always amazed us with the complexities of the stories that they can tell in just an hour. We have complete faith that American Horror Stories will be done just as well.

The series is currently in development and we can't wait to see the spooky and hair-raising stories that the creators come up with. It'll be like our own adult version of Goosebumps.

popular
Love Island’s Afia explains why Gemma’s dad has not been mentioned on show
Two dumped islanders have confessed their feelings for each other since leaving the villa
Why Are Men so Obsessed With Boobs? The Answer is Pretty Surprising...
Here Are The Top 20 Most Common Pin Codes in The World
Selling Sunset's Maya Vander experiences miscarriage
Shaughna Phillips brands Love Island heart rate challenge "fixed" and "vile"
Outrage as woman says doctor told her to "be quiet" during labour
You may also like
2 years ago
It turns out that winter Love Island has a secret Black Mirror connection
3 years ago
Miley Cyrus's episode of Black Mirror looks like it's going to be total chaos
3 years ago
We finally have our first look at the new season of Black Mirror
3 years ago
Netflix sued by choose your own adventure brand over Bandersnatch
3 years ago
Kim Kardashian has some important thoughts about Black Mirror: Bandersnatch
3 years ago
Haven't watched Black Mirror's Bandersnatch yet? Here's why you should
Next Page