Is this Gina's replacement?

Brooklyn Nine-Nine returns next month, with the cop sitcom moving to its new home of NBC.

After being saved from cancellation, the new network are making a big song and dance about the new season. 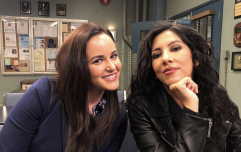 END_OF_DOCUMENT_TOKEN_TO_BE_REPLACED

Last week, we got an absolutely brilliant Die Hard-themed trailer.

Now we have another promo, giving us a look at the new series proper. It's not very long, though it does include one interesting point: a title card flashes up promising "New Faces".

That's followed by a brief scene where Jake and Gina meet actor Mario Lopez, who appears to be playing himself - Lopez is, of course, best known for playing AC Slater in wonderfully-crap early 90s sitcom Saved By The Bell.

This could just be a one episode cameo, but that title card suggests it might be more. Plus, it has been announced that Chelsea Peretti, who plays Gina Linetti, is leaving the show. Could Lopez be her replacement? (Which would be weird if he playing himself).

Season six of Brooklyn Nine-Nine starts on January 10th on NBC in America. It's still not confirmed when and how it'll hit the UK, but it is likely to be on E4 again.

We do however know that season five will be hitting Irish Netflix at the start of 2019.

Brooklyn Nine-Nine was cancelled by Fox in May, but after much outcry, it was quickly picked up for another season by NBC.

Girls With Goals || Her · Ep.161: Feeling Peachy - Sharon Keegan of Peachylean on being an absolute BOSS!
popular
The DIY frozen coffee recipe that's so delicious you'll never pay for an iced latte again
Remember Christian From Clueless? This Is What He Looks Like Now
Khloe Kardashian has JUST confirmed she is pregnant
"This Is Horrible News" - Paul Walker's Long-Term Girlfriend Is Left Heartbroken
Here's what happens on every day of your menstrual cycle (roughly)
How to INSTANTLY unblock your stuffy nose (we swear this works)
Someone has ranked the penis size of men from all over the world
You may also like
11 months ago
Brooklyn Nine-Nine scraps four planned episodes after George Floyd's death
1 year ago
Season six of Brooklyn Nine-Nine lands on Netflix this weekend
1 year ago
The dog who plays Cheddar on Brooklyn Nine-Nine has passed away
2 years ago
Season five of Brooklyn Nine-Nine is now (finally) available on Netflix
2 years ago
The trailer for Brooklyn Nine-Nine season six is here and it looks CLASS
2 years ago
Noooo! Brooklyn Nine-Nine is losing one of their original cast members
Next Page