If you haven't read Where The Crawdads Sing by Delia Owens, I'm genuinely jealous.

If you love books or have simply been alive for the last few years, you'll have heard about Where the Crawdads Sing. The book by Delia Owens smashed records across the globe becoming Amazon's most bought fiction of 2019, it also made its way into several high profile bookclubs, including Reese Witherspoons' - who quickly set about producing the upcoming movie much to the delight of fans the world over.

We were practically giddy when the news landed that our favourite Normal People actor, Daisy Edgar Jones, would take on the lead role of Kya and now, there's even more reason to celebrate as new cast announcements have just been released.

END_OF_DOCUMENT_TOKEN_TO_BE_REPLACED

According to Deadline, joining Edgar Jones for the movie is Garrett Delahunt of Fear the Walking Dead fame, Michael Hyatt who fans will know from Snowfall, Sterling Macer Jr. who starred in Dragon: The Bruce Lee Story, and newcomer Jojo Regina will all be joining the cast. 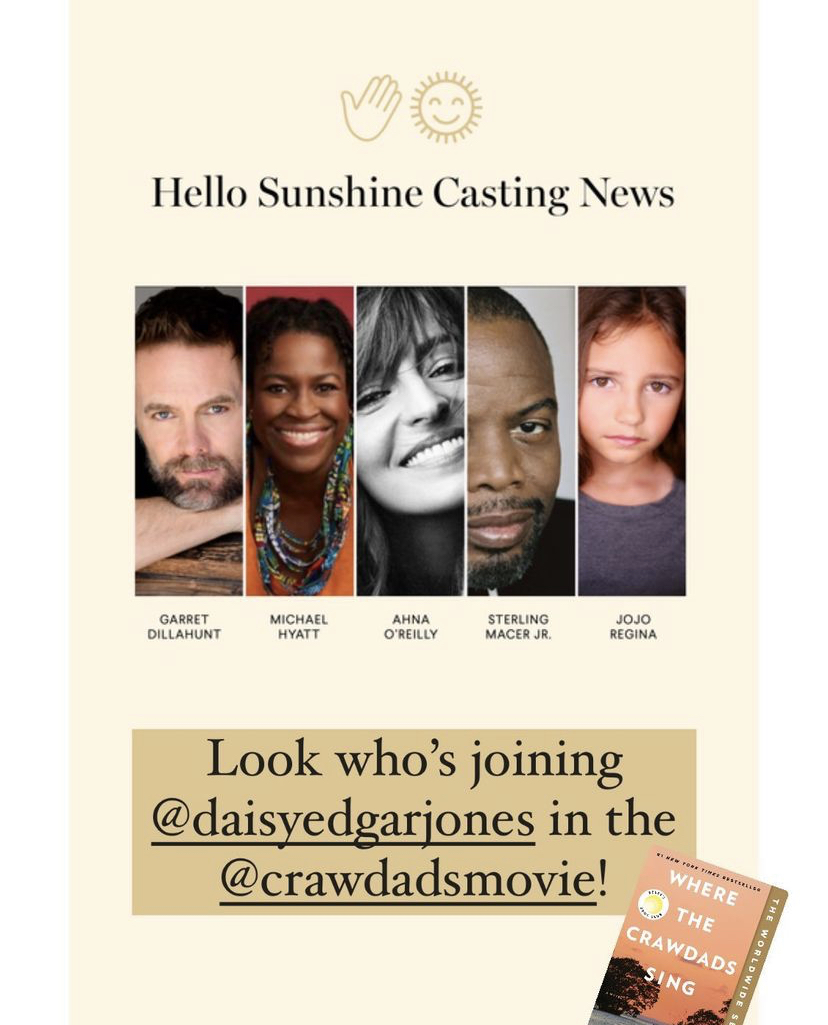 Owens' best-selling 2018 novel follows two intertwining storylines. One explores Kya, a young girl abandoned by her family who lives off the land in North Carolina, while the other investigates the murder of Chase Andrews, a local celebrity from the same area. Olivia Newman is directing the much-anticipated film and Oscar-nominated Lucy Alibar is the woman behind the script.

Filming for the adaptation is set to get underway sometime this month and just a couple of weeks ago Edgar Jones shared a behind the scenes look at progress writing, "So it begins" on her social media while tagging the film's official Instagram and Sony Pictures.

If filming doesn't suffer from Covid-19 related delays we could be looking at an early 2022 release date, we'll keep you posted on more Where The Crawdad Sing news as it lands.

popular
You stars Victoria Pedretti and Dylan Arnold spark romance rumours
Viral TikTok shows how to keep warm wearing tights in winter
Channel 4's Breastfeeding My Boyfriend doc criticised for contributing to stigma
Late Late Show viewers are not happy with Ryan's questions for Billy Connolly
Gwen Stefani reportedly pregnant with baby number four
Why Are Men so Obsessed With Boobs? The Answer is Pretty Surprising...
Miley Cyrus responds to rumours she is expecting her first child
You may also like
1 month ago
Coco is officially the Ireland's favourite Pixar film, according to science
2 months ago
Nicolas Hoult cast in lead role of Dracula spinoff movie Renfield
3 months ago
QUIZ: How well do you remember Uptown Girls?
3 months ago
Don't panic but Chris Pine has been spotted in Ireland
4 months ago
Enchanted sequel: New pictures from the Enniskerry set as filming gets underway
5 months ago
Dear Evan Hansen: The award-winning musical is heading for screens and the trailer is here
Next Page