Taylor Simone Ledward delivered a beautiful speech on behalf of her late husband.

Boseman was given the award for Best Actor in a Motion Picture (drama) for his performance in Ma Rainey's Black Bottom. 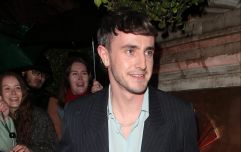 END_OF_DOCUMENT_TOKEN_TO_BE_REPLACED

Accepting the award, Ledward said that she did not have the words of her late husband, but that he would have thanked his ancestors if he was alive today.

"He would say something beautiful; something inspiring; something that would amplify that little voice inside all of us that tells you: you can; that tells you to keep going; that calls you back to what you are meant to be doing at this moment in history."

Viola Davis and Denzel Washington also got a mention in Ledward's speech, among others.

Taylor Simone Ledward accepts the award for Best Actor in a Motion Picture, Drama on behalf of her late husband Chadwick Boseman at The #GoldenGlobes. pic.twitter.com/uz20f1kPHi

Meanwhile, it was a night to forget for the Irish this year, with Normal People, Wolfwalkers and Brendan Gleeson all missing out an award for their efforts in 2020.

The Crown was the biggest winner on the night, as it was named Best Drama, and its stars Josh O'Connor, Emma Corrin and Gillian Anderson were all honoured for their roles.

popular
Tommy Fury responds to Jake Paul ruining his baby news
Looks like Maura Higgins knew Molly-Mae's baby name this whole time
Here's why Nicola Peltz-Beckham's family are suing her wedding planners
Chrishell Stause faced "unbelievable" trolling for relationship with G-Flip
Love Island's Zara speaks out after being dumped from the villa
I got my first ever smear test – and it wasn't as scary as people make it out to be
Wayne Lineker called out for comment on Tommy and Molly-Mae's baby news
You may also like
2 months ago
Matt Hancock and Seann Walsh expected to enter jungle early to save I’m A Celeb
3 months ago
Bryan Cranston reportedly working on a Malcolm in the Middle reboot script
3 months ago
James Corden recalls father's advice after "rude, rude comment" to restaurant staff
3 months ago
New Netflix feature is perfect if you no longer want to share an account with an ex
3 months ago
New Netflix true crime documentary focuses on a decades-long missing persons case
3 months ago
Netflix announces launch date for new ad-supported subscription plan
Next Page