Chris Evans is a man on a mission in the first trailer for the gripping new drama Defending Jacob.

The series - based on the 2012 novel of the same name by William Landay - will land on the streaming service on April 24.

In this gripping, character-driven thriller, a shocking crime rocks a small Massachusetts town and one family in particular.

When 14-year-old Jacob Barber is arrested for the murder of his classmate, his parents (Evans and Dockery) try to prove that their son is innocent.

However, it soon becomes clear that things aren't as simple as they appear.

The first three episodes of the limited series will debut on April 24, with new episodes appearing every Friday after that. 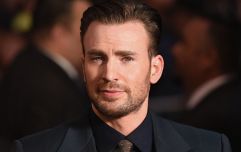 END_OF_DOCUMENT_TOKEN_TO_BE_REPLACED

Defending Jacob is produced by Paramount Television Studios and Anonymous Content, and created, written and executive produced by Mark Bomback, who also serves as showrunner.

Defending Jacob begins on Apple TV+ on April 24. But in the meantime, you can check out the trailer for the series below.

popular
Paul Mescal wore O'Neill's shorts while carrying cans of pink gin so I bought O'Neill's shorts and cans of pink gin
Britney Spears has gifted us a new song, securing her status as a true lockdown icon
This amazing hanging egg chair is coming into Aldi next week and go, go go (but safely)!
After days of silence, Scott and Sofia finally comment on the break up rumours
Women and girls struggling with access to period products during #Covid-19, research shows
Her Quarantine Quiz Week 9: Iconic Irish music videos
Cristiano Ronaldo has been called 'racist' for his latest Instagram post
You may also like
5 months ago
Chris Evans gave his dog a matching Knives Out sweater and the photos are too pure
5 months ago
Chris Evans has started an Aran knit trend, and we're right there with him
7 months ago
Did you know Chris Evans has a brother who looks just like him? Because we didn't
1 year ago
Chris Evans has already said yes to the next series of Strictly Come Dancing
1 year ago
This Twitter account comparing Chris Evans to golden retrievers will brighten up your day
1 year ago
Chris Evans reveals the real names of his newborn twins (and they're too cute)
Next Page