Coronation Street fans were left stunned as Katie McGlynn made a surprise appearance as Sinead Tinker in last night's episode.

The character passed away in October last year, after a long battle with cervical cancer. However, she made a brief reappearance on Friday as her husband, Daniel Osbourne, had a vision of his late wife - and mistook Bethany Platt for her.

Gary Windass attacked Daniel after Maria Connor caught the measles from his son, Bertie, and lost her baby. As Bethany tended to Daniel, the two of them got caught in a downpour - and they ran inside to get dry, as Daniel looked after Bertie.

He told Bethany to put her clothing in the dryer, giving her one of Sinead's robes to wear - and then he fell asleep on the sofa. When he woke up to singing, he saw and heard Sinead - and not Bethany, who was actually in the room. 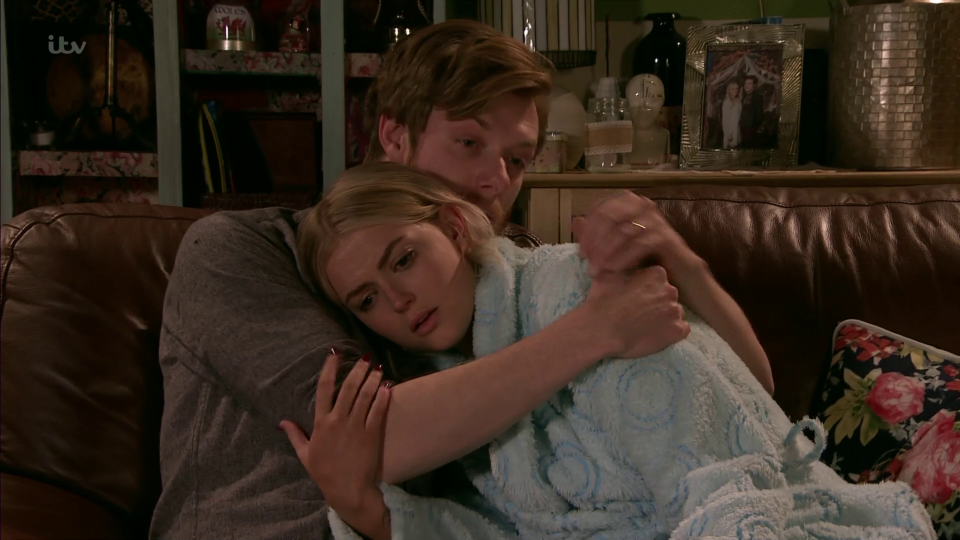 Did I just see what Daniel saw, Sinead?! #Corrie ?

Am im going crazy?! That is Sinead! I swear! @itvcorrie #corrie #sinead pic.twitter.com/g2WffA4qYo

END_OF_DOCUMENT_TOKEN_TO_BE_REPLACED


The Sun report that Katie made a brief return to Weatherfield to film the heartbreaking scene.

“We were delighted that Katie returned to the film the scene," a spokesperson for the soap said. “It gave them extra authenticity and made it a much more powerful scene in the same way that Bhavna did when she returned as Rana for Carla’s psychosis episode.”

Girls With Goals || Her · Ep.155: 'Bits of Me' - Linnea Dunne on the importance of women's health
popular
Scarlett Moffatt discovers ‘30% rain’ on weather app doesn’t mean chance of rain
Baileys chocolate cupcakes are coming just in time for Mother's Day - and any day, really
Princess Anne: Harry and Meghan were right to quit royal duties
Lady Gaga's dog walker shot as her two dogs are stolen
Chloe Ferry and Wayne Lineker announce "engagement"
Jesy Nelson "mentally bullied" herself during Little Mix years
Anne Hegarty shook by "worst ever" final Chase
You may also like
2 weeks ago
Gina Carano has reportedly been fired from The Mandalorian
1 month ago
This Morning interview with Graham Norton goes disastrously wrong
1 month ago
Did you spot this? Bridgerton's Claudia Jessie also starred in Line Of Duty
1 month ago
New series of Reeling In The Years to air on RTE this spring
1 month ago
"Calling new islanders": Love Island is now casting for next season
1 week ago
Another Madeleine McCann documentary is en route
Next Page